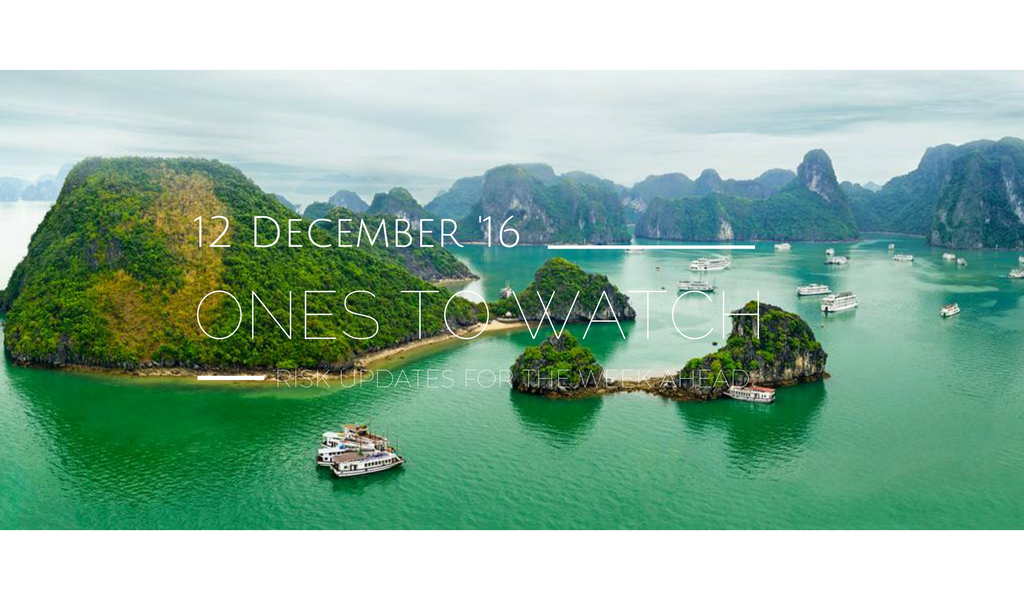 Police in Venezuela arrested more than 300 demonstrators following protests in several cities over President Nicolas Maduro’s decision to withdraw the 100 bolivar note from circulation. Maduro blamed the crisis on international sabotage after the planes carrying the new notes were delayed, but postponed the removal of the bills until 2 January. Meanwhile, the Colombian and Brazilian borders were shut, and are expected to remain so as disruption and protests continue. The opposition has sought to renew anti-government protests at the end of the year, although they no longer have a constitutional method of ensuring new elections given that the government’s obstruction of a recall referendum against Maduro this year. The delay means that he would now be replaced by his vice president in the event of a successful recall vote, rather than new presidential elections being held.

From 19-21 December representatives of Thailand’s government will travel to Malaysia to meet with MARA Patani, an umbrella organisation for separatist groups from the Muslim south, to discuss the designation of certain districts as “safety zones”. The largest separatist group involved, the Barisan Revolusi Nasional (BRN) has already vowed to disregard any ceasefire and to continue armed operations in the safe zones. However, a ceasefire agreement may drive a wedge between it and other separatist factions such as the Patani Islamic Liberation Front (BIPP), the United Liberation Organisation (PULO) and the Islamic Mujahideen of Patani (GMPI), and may curb violence after several weeks of escalating conflict in Pattani and Narathiwat provinces.

Ukraine’s 18 December nationalisation of PrivatBank, the country’s largest bank, should ensure additional IMF aid as the fund demanded Kiev address concerns with the bank’s non-performing loans before additional tranches of its US$17bln bailout are granted. Privatbank has US$10bln in assets but at least US$3.39bln in non-performing loans, largely owed to companies controlled by its former co-owner, oligarch Ihor Kolomoisky. Local media reported Kolomoisky agreed a US$5.3bln repayment scheme, although doubts remain whether he will meet this commitment. Kolomoisky remains in control of Ukrainian International Airlines and other economically significant businesses, plus the personal loyalty of various pro-Ukrainian volunteer battalions. Any change in his position would materially benefit Russian-backed separatist forces, who launched the heaviest attack in recent months on the same day. Although Ukrainian forces claimed successes elsewhere on the battlefield, there is an elevated risk that the war could resume in short order given that sanctions on Russia are likely to be loosened next year and the Russian economy is due to exit its recession brought about by the conflict and sanctions.

Disputes between Greece and its creditors re-emerged, as Athens unilaterally announced plans to provide extra financial support to pensioners and cut VAT to select islands. The Eurogroup responded by suspending plans for debt relief, and could delay a successful review of the bailout programme. A lack of debt relief may also prevent IMF participation in the bailout, and may even preclude Greece’s participation in the ECBs QE programme. While the EU and Athens would like to see Greece’s debt crisis as a thing of the past, Tsipras’ falling popularity may lead him to push for further austerity alleviation policies, while there is little appetite in Berlin to relax their demands. Some countries, including France, are willing to be more lenient – highlighting the splits within the EU. While it is possible that the conflict between Athens and its creditors will worsen, the most likely outcome is a compromise agreement that maintains Greece’s solvency.

A ceasefire was re-established on the morning of 19 December, allowing 10 buses travelling to two pro-government villages besieged in rebel-held territory in Aleppo, Syria, to evacuate remaining residents to government-held areas. The ceasefire failed on 18 December when a group of armed men attacked a convoy of five buses travelling to the aforementioned areas close to the border with Idlib province, pausing an evacuation of civilians from rebel-held territory in Aleppo city already under way. Breaches of the ceasefire will continue for the foreseeable future. Meanwhile, the government is likely to redirect its forces to rebel-held territory in Idlib province in the coming weeks, with greater use of Russian military support to ensure it can successfully retake those areas. Government forces will also attempt to retake Palmyra from Islamic State.

On 19 December, Democratic Republic of Congo President Joseph Kabila’s mandate expires, bringing with it an uncertain political future and precarious security outlook. After the decision to postpone elections, widely seen as a move to extend Kabila’s term in office, and which resulted in the deaths of dozens of protesters in Kinshasa in September, the country has now reached an impasse. Talks between Kabila and members of the opposition broke down on 18 December. However, opposition figures have stated that no protests have been immediately planned for fear of violent reprisals by state security forces, and there are reports of an increased military presence in the streets of Kinshasa. The political deadlock is unlikely to be broken over the coming weeks as political actors plan their next move. As a result, there are significant concerns over the potential for widespread civil unrest and a violent escalation.