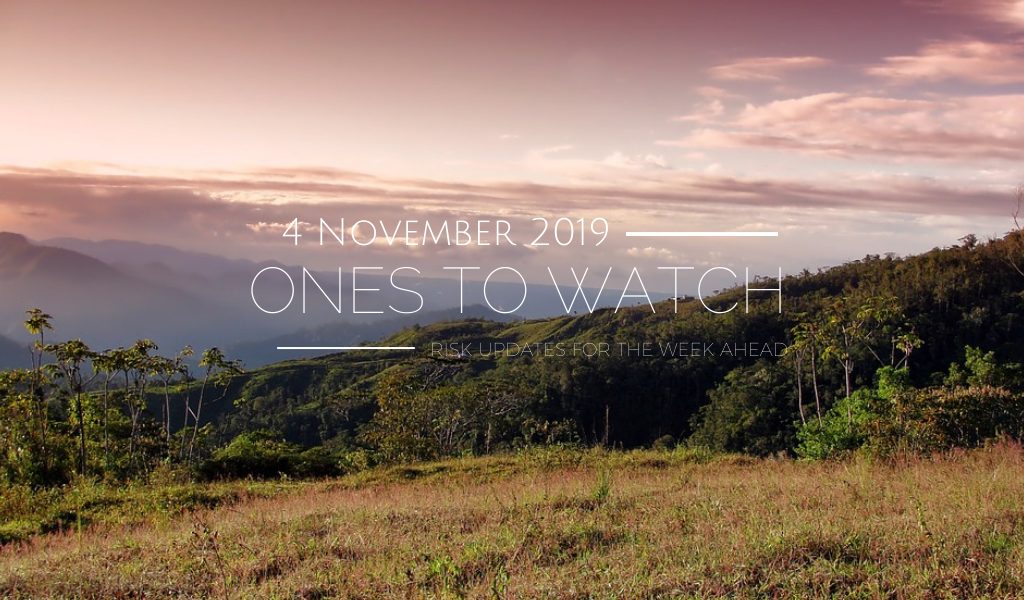 In Brazil, the government expects to raise around US$26bln in signing bonuses from the so-called “Transfer of Rights” (ToR) massive oil auction scheduled for 6 and 7 November. The bidders who win the exploration and production rights in the auction of excess oil from the ToR area, comprised of four zones including Buzios, Sepia, Atapu and Itapu, could end up paying combined signing bonuses of around US$26bln, potentially making it the largest oil bidding round in history. On 15 October a Senate committee passed a bill dividing the proceeds from the upcoming auction, which also upheld previously granted legislative approval to an agreement between the government and Petrobras settling a protracted dispute. International oil giants including Chevron, ExxonMobil and Royal Dutch Shell are expected to participate. Contracts are expected to be signed by March 2020.

On 31 October the Financial Times revealed that China may abandon efforts to create a long-awaited mega-merger between chemical giants SinoChem and ChemChina due to challenges in bringing the two management teams together. In July 2018 Frank Ning was put at the helm of both companies to oversee the merger, without achieving the desired effects. ChemChina’s RMB 83.37bln (US$12bln) in debt maturing in 2020 and a negative of RMB 9.98bln of operating cash flows in the year through June is likely to be a major sticking point for SinoChem. There are also concerns over the US’s reaction to the change of ownership of global assets, including Swiss pesticide producer Syngenta AG. SinoChem will likely take over several of ChemChina’s larger assets in a smaller-than-planned acquisition. However, efforts towards a merger have not yet been totally abandoned.

Ukraine’s state oil and gas company Naftogaz filed a lawsuit against Russia’s Gazprom with the Stockholm court of arbitration. Naftogaz’s chief executive said that the claims are in response to a lawsuit filed by Gazprom in April 2018. An arbitration ruling is not expected until 2021. There is precedent for Moscow to avoid honouring arbitration awards in such politically charged cases. Should it lose the lawsuit, it is unlikely to pay out. Kiev is likely to lose Gazprom’s gas transit business over the coming years. In Moldova, the coalition between the Russia-orientated Socialist Party and the pro-European ACUM bloc is coming under increased strain as the Socialist Ion Ceban defeated ACUM’s deputy leader Andrei Nastase in the Chisinau mayoral elections. The Socialist Party will seek to continue to increase its control over the country’s politics.

Europe: United Kingdom to head to the polls in critical general election

The British Parliament agreed a 12 October snap vote that is likely to prove one of the most decisive parliamentary elections in the country’s recent history. Conservative leader and incumbent Prime Minister Boris Johnson is seeking a majority for his party so as to be able to pass the new EU Withdrawal Agreement struck with Brussels in October. However, he faces a challenge from the right with Nigel Farage leading his Brexit Party into the election on a no-deal platform. Labour is likely to lose seats given its cratering position in the polls, but the rise of the staunchly anti-Brexit Liberal Democrats and strong polling for the Scottish Nationalist Party could see the Conservatives lose over 50 seats, while the Brexit party may spoil the Conservatives ability to take sufficient seats from Labour.

Algeria’s protests re-escalated to their highest numbers in months and look set to continue in advance of elections scheduled for 12 December. Demonstrators protest that the political elite maintain their hold on the political and economic environment despite the ouster of former president Abdulaziz Bouteflika in April. Disruption or a delay to elections set to take place on 12 December is expected. Meanwhile, protesters in Lebanon continued to rally, reacting to demonstrations supporting President Michel Aoun’s reform promises. A general strike in which banks have again closed is ongoing. Unofficial currency restrictions have been imposed and the economic crisis is deepening. Iraq’s anti-government protests are becoming increasingly violent and rioting will continue to escalate. The Iranian consulate in Karbala was stormed and burnt out before protesters were shot. An attack on US military or diplomatic assets is increasingly likely.

In its long-awaited review, Moody’s maintained South Africa’s sovereign credit rating at ‘Baa3’ – one notch above ‘junk’ – but lowered its outlook from stable to negative citing persistent weak growth and larger than expected challenges in implementing structural reforms and reining in public debt. The ratings agency also cut its medium-term growth projection from 2.5-3 per cent annually to 1-1.5 per cent. The update came days after Finance Minister Tito Mboweni forecast that public debt would pass the 70 per cent of GDP mark by 2022-2023. Moody’s warned that a downgrade was possible unless the government implements further reforms. The government is likely to announce further measures to contain debt and accelerate the restructuring of public enterprises. It is unclear whether these will prevent South Africa from losing its last investment-grade rating from a major agency.