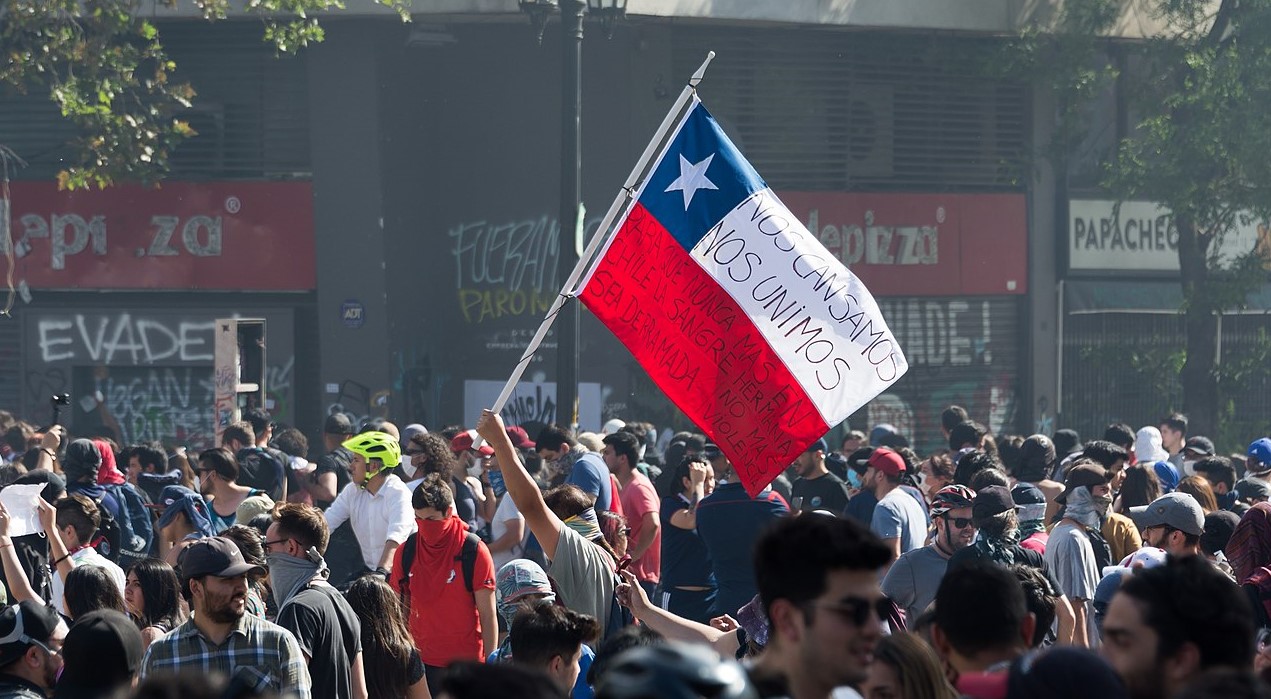 Chile faces two crucial dates that will have a major impact on the country at least over the coming year. 18 October will mark the one-year anniversary of the nationwide protest movement which managed to impose a constitutional reform process on centre-right President Sebastian Pinera’s government. Such a process is far from the legacy that Pinera envisaged for his second non-consecutive term in office, which began in March 2018. However, the upcoming 25 October referendum on whether a new constitution should be drafted will, alongside the protest movement itself, define the current presidency. The COVID-19 pandemic added further complexity to this dilemma but did not stop nor it will derail the reform process which is about to intensify. 18 and 25 October are set to become the starting points of a new phase, one in which all eyes will be focussed on how the government manages to contain the potential for renewed disruptive unrest, which could certainly escalate should the reform itself fall short of expectations. The new constitution would not be approved until 2022, and a general election is scheduled for November 2021. The constitutional and electoral processes, overlaid with the risk of unrest and efforts to mitigate the impact of COVID-19, will fuel policy uncertainty in a country long seen as a regional beacon of stability.

Less than two weeks away from the referendum, the ‘approve’ vote – meaning that a new constitution should be drafted – appears set to win. The constitutional reform debate is not new to Chile. Pinera’s predecessor, centre-left Michelle Bachelet, had presented a proposal to replace the current 1980 constitution, but this did not make its way through Congress. Although the protests that erupted in October 2019 were not triggered by demands for a new constitution, these soon became part of the backbone of the protest movement. This also highlighted the fact that the current 1980 constitution dates back to Augusto Pinochet’s dictatorship and – although amended several times – is still seen as lacking legitimacy. It is worth, then, to consider three points. Firstly, the referendum – in which Chileans will also be asked which type of body should draft the new charter – should be seen as a starting point. A lengthy and certainly complicated process will follow. Secondly, such process will be marred by uncertainty given that the areas which would be the main focus of reform have not yet been made clear. An agreement on such areas cannot be seen as guaranteed. Moreover, general elections will take place in the middle of this debate. Thirdly, a potential mismatch between what the populace expects will be included in the new constitution and what the constituent assembly will debate and present as a proposed new text risks further heightening the risks of unrest and political instability at least in 2021 and 2022.

Even though the socio-political crisis triggered by the protests is almost one year old, the upcoming referendum will kick start the process towards the country’s new set up. On 25 October it will also be decided if a mixed convention – composed in equal parts by elected members and sitting lawmakers, or a convention made up exclusively of members elected specifically for the task – will be in charge of drafting the new constitution. Such a convention would not be elected until 11 April 2021. Bearing in mind that the referendum, originally due to take place in April 2020, was postponed due to COVID-19, further delays in the overall process remain a possibility. The debate will continue and most likely intensify until the convention is set up, but clarity on the potential for actual content of the reform will remain elusive until the drafting process begins. Such a process is meant to last nine months from the establishment of the constituent assembly, a period that could be extended only once by three months. Therefore, it will not be until 2022 when the proposed new constitution would be put down to a referendum, after which Congress would have to formally approve the new charter by a two-thirds vote.

The process will be launched under Pinera’s administration, and most likely concluded by whoever wins the presidency in November 2021. Consecutive re-elections are not possible in Chile, and the result of the next general elections will be heavily influenced by the constitutional process and by how the government manages to navigate the impact of COVID-19. Although Pinera’s government has accommodated several and significant demands made by the protest movement – resulting in significant public spending increases far before the COVID-19-related crisis hit the country – polarisation is set to increase ahead of all the upcoming votes. As polarisation grows so does the risk of political and policy instability – particularly in an electoral context. Concerns over the impact of the transition period on the overall business and investment environment are also set to rise. Even though there are relevant certainties that will maintain at least part of Chile’s core, significant reform should be expected.

A few elements of utmost importance will remain certain throughout the expected constitutional redraft process. The convention, no matter its composition, will not be able to make any amendments to the current constitution until the new one is enacted by Congress. It will also have to respect the fact that Chile is a republic to be governed under democratic principles. Final and enforceable judicial sentences will also have to be respected, as well as all international treaties which have been ratified and which are already in force.

A second set of certainties is that the protest movement will push for socially-oriented reforms. Demands have included an overhaul of the pension system, of the healthcare system, higher minimum wages, higher pensions, a reform of the national police force – the Carabineros –, an education reform and a tax reform, amongst others. The longstanding conflict with the indigenous Mapuche people will also become central as will likely be regulatory frameworks affecting several key sectors including mining and electricity. So far, there is a significant lack of clarity as to how many of the aforementioned demands would be included in a new constitution and how many of them would be treated as separate reforms. Although there seems to be an understanding that key elements of Chile’s longstanding business-friendly and free-market approach would be preserved – mainly the respect for private property and relative regulatory stability – certain modifications in these domains cannot be entirely ruled out – or at least pressure for changes in these areas should be expected.

The current and incoming administrations – and the constituent assembly itself – will have to calibrate the expectations of the protest movement – which continues to lack clear leadership – with what will be debated and presented as the country’s new constitution. There is no guarantee that the latter will meet the protesters’ demands, which appear to continue to grow as the process moves forward.

One of the main risks facing the constitutional process is a mismatch between expectations and final results. The fact that the process was initiated to appease and contain the largest and most violent wave of civil unrest since the country’s return to democracy in 1990 should be enough to highlight the likely consequences of potential renewed anger and frustration. Although protesters have largely respected COVID-19-related restrictions imposed since mid-March, incidents have resumed as restrictions started to be gradually eased and, in some cases, also in spite of them in the lead up to 18 and 25 October. The lack of clarity as to what the protest movement specifically expects from the new constitution – aside from a re-foundation of the Chilean state –adds to this risk. The electoral process and the increasingly pressing need to focus on economic recovery turns the potential for further waves of unrest all the more worrisome.

There is another risk of a mismatch to be taken into consideration: the state’s response vis-à-vis the unrest that is expected to continue to erupt over the coming months. The United Nations have accused the Chilean security forces – including the army which was deployed under the state of emergency declared shortly after the protests began in October 2019 and the Carabineros police force – of human rights abuses. The security forces’ heavy-handed response was met with heightened anger and determination to remain on the streets. The government reacted. Made significant concessions. Called for calm. The protests, nevertheless, continued. The summer months led to a short-lived lull before violence resumed in March to then be quelled by COVID-19-related restrictions and fear of contagion. On 11 September even as some restrictions began to be eased in certain areas, the government extended the 90-day state of catastrophe in place since mid-March due to the pandemic for another 90-days for the second time. The extension means that both 18 and 25 October will take place under measures which grant the government extraordinary powers to restrict freedom of movement.

Any sign of explicit or perceived disproportionate use of force will further inflame already high tensions and likely become a trigger for renewed bouts of unrest, even should the constitutional process move forward according to protesters’ expectations. Video footage showing a police officer apparently pushing a protester off the Pio Nono bridge in Santiago on 2 October reinvigorated protests which increasingly demand action against police brutality. The government must maintain a delicate balance. It must support security forces who are responsible for maintaining order in the context of the COVID-19 pandemic amid the presence of groups ready to resort to widespread violence including looting, arson attacks and vandalism with the intention of increasing destabilisation risks. At the same time, it must also show unchallenged readiness to root out any indication that human rights are not being upheld, stemming from the abuse of use of force.

The coming weeks will see an imposed agenda further consolidate and an uncertain reform process begin. The evolution of the two will define the country’s future, hopefully one in which stability becomes once again Chile’s norm. Easier said than done.