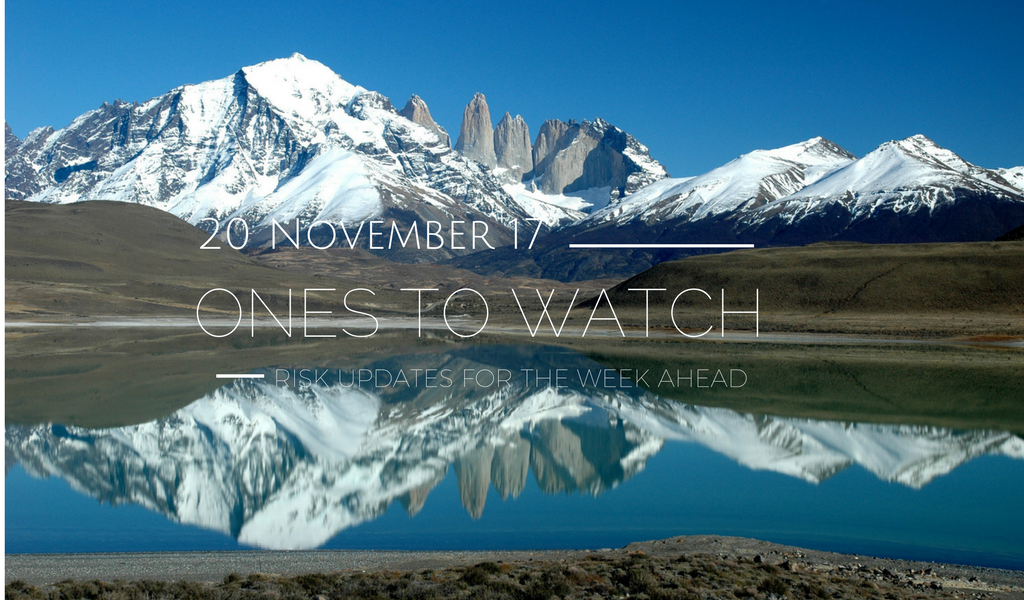 In Chile, centre-right former president Sebastian Pinera (2010–2014) will face centre-left Senator Alejandro Guillier, who is supported by most of ruling centre-left Nueva Mayoria coalition parties, in a 17 December presidential runoff. Pinera is likely to win. The 19 November first round results granted Pinera an expected victory. He secured 36.64 per cent of the vote, considerably less than the 44 per cent predicted by the final polls. Guillier won 22.69 per cent, in line with most expectations. Leftist Beatriz Sanchez surprisingly secured 20.27 per cent of the vote. The fragmentation of the ruling centre-left,  which presented 6 candidates, went in favour of the opposition. Should the centre-left candidates unite for the runoff, Pinera’s chances of returning to power would be lowered. Although unlikely, this scenario cannot be entirely ruled out. Both candidates will try to secure alliances over the coming weeks.

On 26 November Nepal will hold the first phase of parliamentary and provincial elections as the government moves to implement the federal government system promised in the 2015 constitution. The second phase will follow on 7 December. The elections are of huge importance to a country that has faced turmoil for decades, with the government that emerged from the civil war that ended in 2006 marred by infighting and paralysis. Despite some violence, municipal elections in the summer of this year were largely a success, raising hopes that the upcoming elections will lead to a full transition to democracy. While the coalition Communist Party Nepal – Unified Marxist Leninist (CPN-UML) coalition will vye with the Nepali Congress for seats, campaigning has focused on economic development rather than political ideology. It is likely that the victorious party will seek support for crucially-needed infrastructure development with international partners.

On 15 November First Deputy Central Bank Chairman Timur Ishmetov announced that as of 1 November foreign and gold reserves stood at US$26bln. It is the first time Uzbekistan has publicly released reserve holding data, according to Ishmetov. In late July Deputy Finance Minister Mubin Mirzayev stated Tashkent’s foreign currency reserves were ‘about US$20bln,’ in response to a question asking him to expand on the IMF’s description of Uzbekistan’s currency reserves as ‘ample’. The government is reportedly seeking a sovereign credit rating and potentially considering issuing Eurobonds in 2018. Slow market liberalisation and a sustained push to attract FDI will continue. Uzbek state banks such as the National Bank of Uzbekistan (NBU) are largely rated between B1 (B+) and B3 (B-) by Moody’s. AKE’s previous forecast had been that a likely sovereign credit rating would have a ceiling of BB-. Given the revelation that reserves are US$26bln, a rating of BB could be issued.

In Germany, The Free Democrats (FDP) walked out of negotiations to form a new governing coalition. FDP head Christian Lindner said that the four parties taking part in the talks – Chancellor Angela Merkel’s Christian Democrats (CDU), their Bavarian sister party (CSU), the Greens and his FDP – lacked a ‘common basis of trust’. Merkel has few options remaining. She could attempt to form a minority government, although Merkel has said that she does not favour that option. A minority government would struggle to commend authority in the Bundestag and risks being ineffective. Social Democrats (SPD) leader Martin Schulz has said that he will not consider a ‘grand coalition’ with the CDU. It is also plausible, perhaps even likely, that a new election will be held.

MENA: Dana Gas ruling in London likely to be first of many

On 17 November, the High Court in London ruled in favour of creditors against the United Arab Emirates oil and gas company Dana Gas in a case disputing repayments of a US$700m bond. Dana Gas claims it is not obliged to repay the mudarabah sukuk, issued in 2013 as part of a US$850m package which was restructuring an existing US$1bln debt. In courts in the UK and UAE, Dana Gas has claimed that the Islamic component of the 2013 financing agreement signed under English law was now invalid due to changes in practises regarding mudarabah sukuk. A separate ruling is due from the Federal Court of First Instance in Sharjah, UAE, on 25 December which Dana Gas refused to cancel under order from the UK High Court. Dana Gas has indicated it will appeal the High Court ruling, and could do so as early as this week.

Sub-Saharan Africa: Uncertainty as Mugabe refuses to stand down

On 20 November a 10:00 GMT deadline for Zimbabwe President Robert Mugabe to stand down passed with the veteran leader clinging to power. Mugabe was allegedly meant to resign during a televised speech on 19 November but went off script, with some suggesting he had switched his speech. The long-time ruler’s intransigence means he is likely to face the indignity of impeachment proceedings by his Zanu-PF party. A majority of MPs have signalled they would support impeachment. Although Mugabe continues to dig his heels in, he will be removed one way or another. This would pave the way for former vice president Emmerson Mnangagwa to take over the presidency, although it is unclear if this will be at the head of a more inclusive transitional government or as a direct replacement as head of the ruling Zanu-PF. It awaits to be seen whether Mugabe’s former right hand man will be able to make good on pledges to deliver democracy, development and economic prosperity.