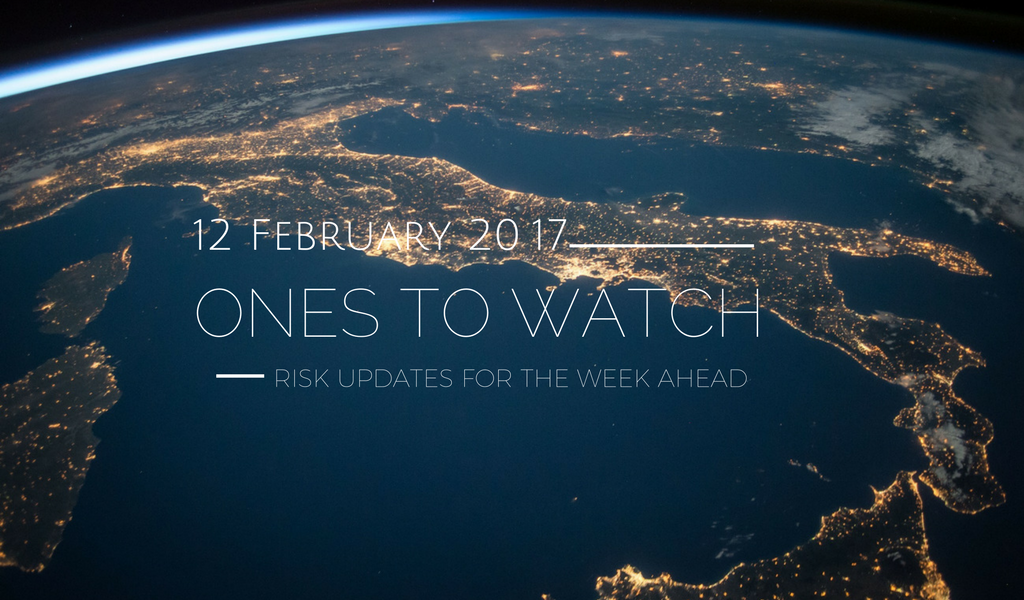 In Brazil, Congress is scheduled to vote on President Michel Temer’s pension reform, a long-awaited fiscal austerity measure seen as crucial to shore up the budget. Discussions are scheduled to begin on 19 February although they could be slightly delayed given the need to vote on Temer’s decree ordering the Brazilian army to take over public security in Rio de Janeiro state amid increasing crime-related violence. No constitutional amendments can be approved while a federal intervention is in place, and as the pension reform requires reforming the constitution, Temer has stated he would temporarily suspend the intervention for the reform to be implemented. It is unclear if the government has enough support for the reform, which has already been watered down, to pass. Uncertainty will remain.

‘Come what may, we will revive the Budhi Gandaki [hydropower] project’, Nepal’s new Prime Minister Khadga Prasad Sharma Oli told media over the weekend. Gandaki’s Communist Party of Nepal (Unified Marxist-Leninist) party previously gave China’s Gezhouba Group permission to start work on the US$2.5bln project in 2015, before it was cancelled by a new government that took over as part of the country’s previous power-sharing arrangement. However, Oli won the country’s first full elections in decades and has returned to power with a strong mandate for a closer relationship with China. This will cause major consternation in India, which regards Nepal as being in its sphere of influence. The next week will likely see the announcement of more Chinese infrastructure projects in the country. Indian companies will have to move swiftly if they are to avoid losing out.

On 19 February prominent Russian oligarch Oleg Deripaska stepped down as president of EN+ and Rusal. EN+ CEO Maxim Sokov will become its president and Vladislav Solovyov, CEO of Rusal, will become its president. Deripaska cast the move as an effort to spend more time managing automobile manufacturer GAZ, but it is more likely tied to sanctions concerns. Deripaska also renewed his spat with fellow oligarch Vladimir Potanin on 16 February over control of Norilsk Nickel amid reports Potanin was seeking to buy Roman Abramovich’s stake, acquired in 2012 to settle a previous Deripaska-Potanin spat.  Deripaska has also received significant negative attention in recent weeks as he has feuded with opposition activist Alexei Navalny, who together with an ex-call girl whom Deripaska was frequently photographed with accused Deripaska of bribing Deputy Prime Minister Sergei Prikhodko. Deripaska’s former employee, Paul Manafort, also President Donald Trump’s ex-campaign manager, also faces trial over money laundering, in part related to Deripaska’s funds. Deripaska could sell additional shares in EN+, which launched its IPO in London in October 2017.

Bank of Latvia governor Ilmars Rimsevics was arrested by the Corruption Prevention Bureau on 17 February. Local media reported the investigation of Rimsevic, governor since 2001, could be linked to fraud or sanctions evasion. The US Department of Justice linked ABLV bank, Latvia’s third largest, to facilitating North Korean sanctions evasion and illicit activity from Russia, Azerbaijan and Ukraine on 13 February. The ECB halted payments from ABLV on 19 February. Prime Minister Maris Kucinskis said there was no threat to the financial system but called an emergency cabinet meeting. Latvia’s banks have long faced corruption concerns. Also on 17 February British Prime Minister Theresa May conceded Britain would likely remain open to the European Court of Justice, including European Arrest Warrants. That move could prompt further sniping from hardliners within her own Conservative party. May’s speech was only lukewarmly received amongst EU officials.

MENA: Government intervention could risk clashes with Turkey in Afrin

Tensions will remain high in Kurdish-controlled northern Syria. The Syrian Kurdish-led administration in Afrin and the Syrian government have reportedly reached an agreement for Popular Defence Forces units to enter Afrin to help the People’s Protection Units (YPG) repel Turkish and Arab forces deployed on Operation Olive Branch. Syrian state TV reports claim pro-government forces would deploy in Afrin within hours. Kurdish officials have denied the agreement is finalised. If launched, the mobilisation will likely prompt backdoor negotiations between the Turkish and Syrian governments to reduce the risk of friendly fire incidents and clashes, with Syrian troops deployed to replace YPG troops in the city of Afrin. Separately, the Turkish government proposed a joint deployment of troops to US Secretary of State Rex Tillerson in Manbij last week in an attempt to improve their bilateral relationship only if YPG fighters withdrew from the area to the eastern bank of the Euphrates river. Tillerson may delay an agreement which undermines its existing relationship with the YPG against Islamic State.

Sub-Saharan Africa: Uncertainty ahead for Ethiopia as state of emergency imposed

On 15 February Hailemariam Desalegn resigned as Ethiopia’s prime minister. Desalegn stated that he made the decision to help facilitate the ongoing process of political reform. His decision added to the cautious optimism that the government will make good on its pledge to open democratic space – especially with rumours that the next prime minister will be an ethnic Oromo. However, celebrations were cut short when, the next day, the Council of Ministers declared a state of emergency for the second time in three years. The state of emergency will be in place for at least six months and includes a ban on protests as well as extensive press restrictions. It directly contradicts recent steps to address grievances and risks irrecoverably damaging the trust between the population and the government. Ethiopia is now facing a protracted period of uncertainty, which could have grave implications both at home and abroad,  given Ethiopia’s prominent role in the South Sudan peace negotiations and UN peacekeeping missions.