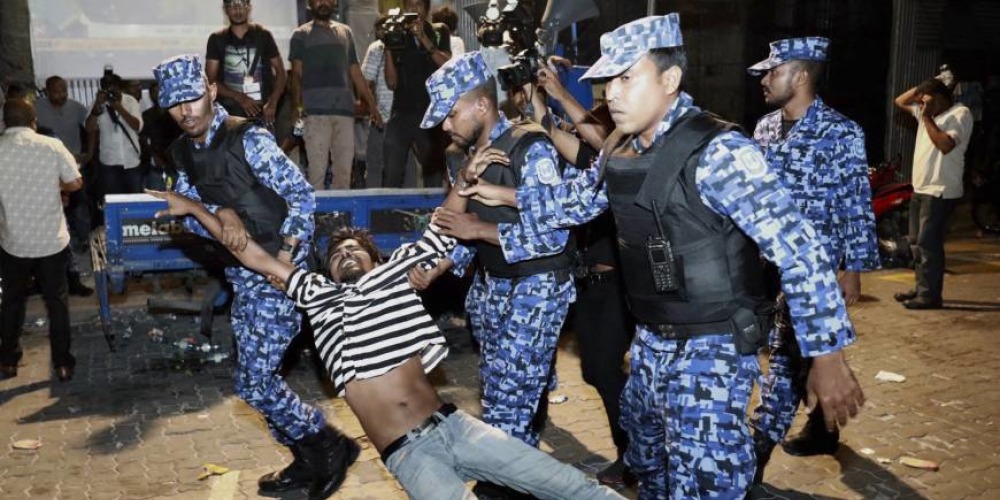 The Maldives’ President Abdulla Yameen has sought to crush political opposition over the course of his five years in power, either by having opponents locked up or forced into exile. Having become accustomed to obeisance, he and much of the international community were largely taken off-guard when the Maldives Supreme Court voted to quash the 2015 conviction of Yameen’s predecessor and political opponent Mohamed Nasheed on terrorism charges and called for the release of various of Yameen’s political opponents.

Since then, the Maldives’ security situation has deteriorated rapidly. Reacting to the verdict, Yameen declared a 15-day state of emergency, giving the security forces extra powers to search homes, carry out arrests and to restrict freedom of assembly. ‘This is not a state of war, epidemic or natural disaster. This is something more dangerous’, he told the nation on TV. Security forces in riot gear stormed the Supreme Court building, arresting the Chief Justice and another judge on unspecified crimes. The rest of the court swiftly reversed their decision. For good measure, Yameen also ordered the arrest of his half-brother and former dictator of the country, Maumoon Abdul Gamoon.

There have been several clashes between security forces and protesters in the capital Male. Tensions remain high in the island nation of 417,000. With Male the size of a small town, a coup could be accomplished rapidly. Nasheed, who remains in exile in London, has called for India to intervene militarily. While the Indian government has so far kept quiet, reports suggest that it has sent military ships into international waters an hour outside of Male, and foreign policy hawks in New Delhi are pushing for action.

If no move against Yameen comes in the weeks ahead, instability is likely to persist at least until the general election scheduled for August. The economic impact of this uncertainty will be devastating. The United States, the United Kingdom and several other countries have already issued travel warnings to their citizens. With tourism accounting for one third of the Maldives’ economic output, a prolonged crisis could significantly harm growth. Credit ratings agency Moody’s recently opined as much, noting that a state of emergency in 2015 led to growth slowing to 2.8 per cent from 6 per cent.

A similar loss of revenue in 2018 could prove disastrous for the Maldives, particularly as it owes between US$1.5bln to US$2bln to China, with much of this debt due for repayment in 2019 and 2020, according to Nasheed. The government’s monthly revenues were typically below US$100m even before the recent crisis.

The crisis has wider geopolitical implications. Nasheed has called for Indian intervention and stirred anti-Chinese sentiment in attacks against Yameen, accusing him of allowing China to colonise the Maldives though excessively-leveraged and wasteful infrastructure deals. On the other hand, President Yameen sent a representation to China to reaffirm its support for his government. Both countries see the Maldives as highly strategic for their geostrategic ambitions, with India viewing it as within its natural sphere of influence, and China seeing it as a key outpost for securing global shipping routes. While it does not represent the view of the Chinese leadership, some firebrand state media threatened that China will ‘take action’ if India becomes militarily involved.

The internal power politics of this tiny nation risks becoming a proxy battle for influence between two powers with populations of over 1.3 billion people. With the Maldives largely in China’s debt, Beijing, and by extension Yameen, largely have the advantage.