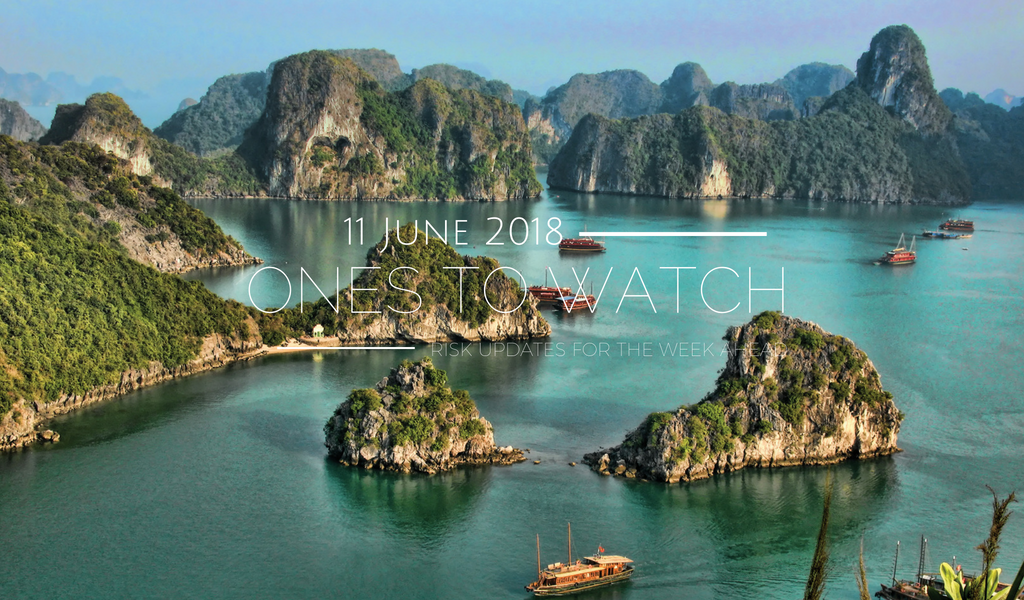 In Colombia, a presidential runoff is scheduled to take place on 17 June. Right-wing Democratic Centre (DC) party candidate Ivan Duque leads in the last poll released before the upcoming vote. According to the poll, Duque has a 16.5-point lead over leftist Gustavo Petro, with 52.5 per cent backing Duque and 36 per cent supporting Petro. 11.5 per cent of those surveyed stated that they would cast a blank vote. Duque and Petro are contesting the centrist vote in what will likely be the most polarised runoff in Colombia’s history. Although polls in Colombia cannot be entirely trusted, Duque, former president Uribe’s chosen candidate, is increasingly likely to win. The ELN guerrillas plan to hold a unilateral ceasefire between 15 and 19 June to improve the security environment. Nevertheless, the risk of targeted political violence should not be overlooked.

China has warned its citizens in Vietnam after the Vietnamese government’s plans to allow foreign investors to lease land in economic zones for up to 99 years sparked anti-Chinese riots in the country. Demonstrators reportedly fear that some areas will become dominated by Chinese investors following the new legislation. On 10 June protesters in Binh Thuan province threw petrol bombs and bricks, injuring dozens of police officers and damaging local government offices and vehicles. Demonstrations also took on an anti-China narrative in Hanoi and Ho Chi Minh City. The government has cracked down on anti-China demonstrations since protests over Beijing’s deployment of an oil ring in the South China Sea left at least 21 people dead in 2014. These latest protests come amid rising tensions over China’s militarisation of the South China Sea and there is a risk of further violent unrest across the country.

The IMF sounded warnings over the firing of finance minister Oleksandr Danylyuk on 8 June even as Ukraine passed key legislation the fund had demanded the same day. Danylyuk’s acting successor, Oksana Markarova, noted in her first interview in the post that she did not expect the Fund to restart the bailout until the third quarter of 2018. In Afghanistan on 9 June, the Taliban announced a halt to operations against the government – but not foreign troops –  for three days in June as part of celebrations for the Eid al-Fitr holiday, which begins on 15 June. The move was in response to a unilateral eight day ceasefire declared by the government around the holiday, though the Taliban did not acknowledge the government’s own statement. The move is the first time the Taliban have ever announced a ceasefire against the government, and could lead to further confidence-building gestures between the two.

Europe: Key Brexit votes due on 12 and likely 13 June

Voting on amendments to the EU Withdrawal Bill is due to be held in Britain on 12 June. Prime Minister Theresa May has agreed to propose a one-year backstop in negotiations with the EU after Brexit Secretary David Davis intimated he may resign if a time-limit was not included. However, the proposal is not binding, nor is it clear whether the EU would accept. The current plan holds that the UK would effectively remain in a customs union if a solution that addresses concerns over future trade, the Irish border, Gibraltar, customs at Dover, and other sticking points are not agreed in time. Some hardline Brexiteers may see this as unacceptable, particularly as there is nothing ruling out that the one-year period could be extended. The vote is expected to be close and will either reject or accept the House of Lords amendments to the EU Withdrawal Bill. Labour will also table a number of amendments aimed at securing a ‘softer’ Brexit in hopes of defeating Prime Minister Theresa May’s minority government, though some pro-Brexit Labour MPs may also vote with the Conservatives. In a leaked audio recording, Foreign Secretary Boris Johnson himself warned of ‘panic’ over the votes. Should May be defeated, it could prompt her to resign and early elections cannot be ruled out.

After a two-day visit to Egypt by new Ethiopia Prime Minister Abiy Ahmed, there is a greater sense of optimism that Cairo and Addis Ababa will be able to reach a negotiated solution to their long-standing dispute over the Grand Ethiopian Renaissance Dam (GERD). Cairo contends that the dam threatens its water security and the two, along with neighbouring Sudan, have been unable to agree on several outstanding issues, including how fast Ethiopia will fill the dam’s reservoir. However, Ahmed pledged to ensure that the GERD would not hurt Egypt’s water security. It is unclear if any concrete measures were agreed upon to resolve the outstanding issues, but the shift away from bellicose rhetoric and towards cooperation will add impetus to ongoing negotiations and raise hopes of a negotiated solution to a dispute that, if realised, could plunge the wider region into crisis.

On 10 June, several thousand people gathered in Kinshasa to watch a video message by presidential hopeful Moise Katumbi from his self-imposed exile in Italy. That the event was allowed to take place is significant in itself, given that previous opposition rallies were violently broken up by security forces. However, given President Kabila’s repeated efforts to derail the election process, it is quite likely that the government’s sudden change of tack is merely window dressing. Investigations are currently ongoing into whether Katumbi should be barred from the race for having previously held Italian citizenship, a welcome pretext for Kabila to eliminate his most dangerous rival. Also noteworthy was the timing of Katumbi’s message, two days after the International Criminal Court’s acquittal of ex-rebel leader Jean-Pierre Bemba, who was President Kabila’s closest rival in the 2006 elections and continues to have a large following in western Democratic Republic of Congo. A Bemba candidacy might well play into Kabila’s hands by dividing the opposition ahead of December’s crucial vote.