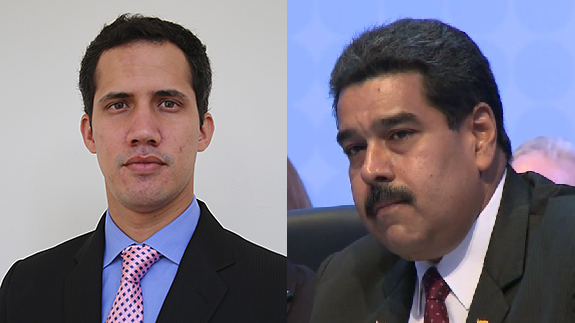 The world has decided to get involved in Venezuela’s long-standing crisis. Developments over the past month have forced a considerable number of countries to declare themselves for or against a transition of power to put an end to Nicolas Maduro’s regime. The United States (US) and most of Latin America and Europe have recognised opposition leader and National Assembly (NA) President Juan Guaido as Venezuela’s interim president. Russia, China, Syria and Iran, among others, support Maduro. A third group of countries, including Mexico, Uruguay and some European countries, have refused to recognise Guaido’s authority but have moved to promote dialogue mechanisms to discuss a negotiated transition. All options appear to be on the table, with the US leading in imposing unprecedented pressure on Maduro to acknowledge defeat. He has so far refused to do so, and is expected to remain defiant as long as the military supports him.

Juan Guaido proclaimed himself interim president on 23 January as part of the opposition’s probably last chance to constitutionally remove Maduro from office. Maduro was sworn in for a second highly-controversial six-year term on 10 January, following fraudulent elections in May 2018. Considering Maduro an ‘usurper’ of the presidency, the opposition based its latest strategy on the Constitution – which Maduro wants to rewrite. Presently, it states that the NA president should be declared ‘president in charge’ and organise a transition if the country’s president is unable to assume office. As it considers Maduro’s election illegitimate, the opposition posits this provision should be applied. The rapid backing of Guaido from Latin American countries was noteworthy as non-interventionism has been the backbone of the region’s foreign policy for decades. The US decision to impose sanctions on Venezuela’s state-run oil company PDVSA, another unprecedented move, further indicates that support for Guaido will go beyond a rhetorical exercise.

The role of the Venezuelan military is crucial in determining the country’s future. Following the Cuban model, Maduro – and former late president Hugo Chavez – granted the military’s higher ranks with lucrative participation in the most attractive sectors Venezuela had to offer. Such participation has also reportedly evolved into controlling organised crime rings, and the ensuing fear of prosecution for such unlawful action should the regime collapse. Although some former and acting generals have pledged allegiance to Guaido, the upper echelons seem to continue to side with Maduro. The US has offered sanctions exemptions to those who support Guaido, the NA has approved an amnesty law for those who facilitate a transition, and Guaido has repeatedly called on the armed forces to halt the state-led repression of dissent and allow deliveries of humanitarian aid.

The politisation of long-awaited humanitarian aid risks further escalating tensions, both internally and with neighbouring countries. Maduro ordered the military to block the entrance of such aid, which he sees as a pretext for intervention. Guaido and the US have urged the Venezuelan military to allow its access. Meanwhile, several countries continue to meet to discuss Venezuela’s best way forward. How these planned aid deliveries play out, will be key in assessing whether Guaido is close to securing a substantial degree of control over the state’s prerogative regarding the use of force.