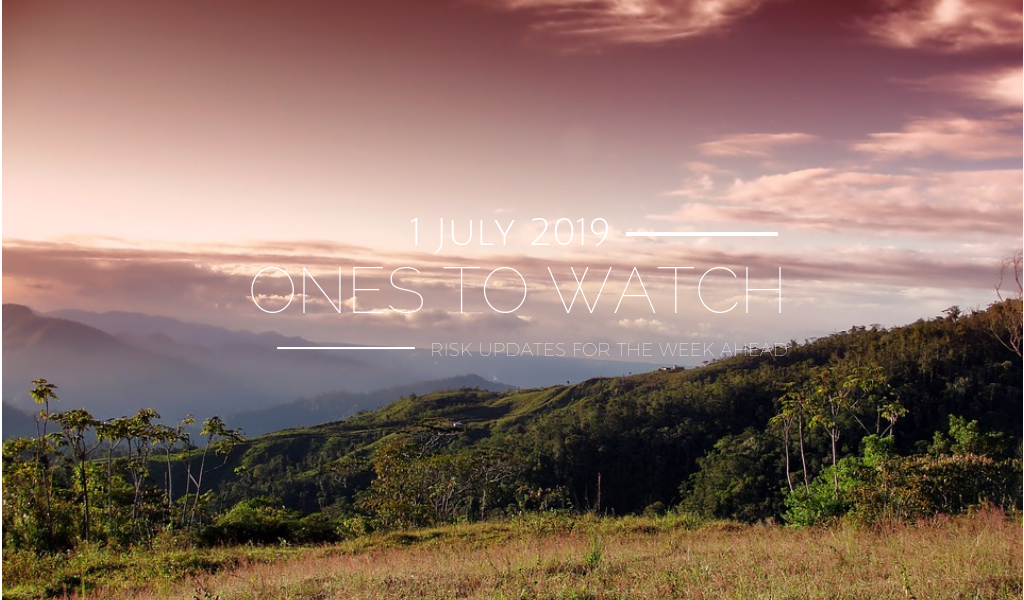 In Bolivia, opposition-led action to protest President Evo Morales’ controversial decision to run for a fourth consecutive term is expected to intensify ahead of the 20 October general elections. On 25 June opposition groups in Santa Cruz department agreed to hold a 24-hour strike on 9 July. Santa Cruz, an opposition stronghold, is Bolivia’s most populated department and is considered the country’s economic engine. Subsequent strikes are scheduled to take place in other departments should the protesters’ demands not be heard. Protests and strikes against Morales will intensify over the coming months. On 11 June thousands took to the street in La Paz to protest the President’s candidacy and demand that Supreme Electoral Court officials resign. Three of the nine presidential candidates took part in the protests, which remained mostly peaceful. Nevertheless, the risk of unrest- and strike-related violence should not be overlooked.

On 29 June US President Donald Trump and Chinese President Xi Jinping met at the G20 Summit in Osaka, agreeing to resume trade negotiations and not to escalate the dispute further for now. Trump announced a delay in the implementation of new tariffs on US$300bln of Chinese imports as well as a relaxation of the US ban on Huawei, allowing US entities to sell some supplies to the Chinese telecommunications firm. However, Huawei will remain on the Commerce Department’s blacklist. The outcome of the much-anticipated meeting is not a breakthrough or truce, but a temporary agreement not to expand the conflict any further. A permanent settlement on the trade and tech dispute remains far off, and there remains a risk, given the precedent, of a rapid reversal of the modest progress achieved during the G20.

On 1 June the deal with OPEC that cuts Russia’s oil output was extended. The extension means Russia will have to continue cutting its oil output by 230,000 barrels daily. The extension by six to nine months was anticipated, and comes amid OPEC’s decreasing share of the global oil market. With Venezuela’s oil supply collapsing and Iran hit by additional US sanctions, Russia and Saudi Arabia have played a greater role in the decisions of the group. Iran’s oil minister commented on the survival of the group due to the domination of Russia and Saudi Arabia. Russian President Vladimir Putin’s announcement of the extension prior to the summit, as well as its approval of the extension shows that Russia is increasingly taking control over the group’s decisions.

National elections in Greece will be held on 7 July, with the centre-right New Democracy Party expected to win. The far-left Syriza party came to power in January 2015 but despite its anti-austerity platform has largely acquiesced to Brussels and international creditors’ demands, though it took some more populist measures in the months leading up to the vote. One major concern is the fate of the Prespa Agreement finalised between the Syriza government and the neighbouring state of North Macedonia earlier this year, which New Democracy has said it would revisit. That could lead to major political instability in North Macedonia, including another round of elections. Greece’s electoral system gives additional seats to the party finishing in first, and New Democracy has a good chance of securing a majority. Otherwise it will have to seek partners from amongst the small liberal centrist and far-right parties.

The International Atomic Energy Agency (IAEA) said that their nuclear inspectors confirmed reports by Iran’s state-backed Fars media that the 200kg limit on enriched uranium reserves under the 2015 nuclear deal (JCPOA) had been breached, after Tehran’s withdrawal from two parts of the deal in May 2019. The violation jeopardises efforts by remaining allies France, Germany and Britain to circumvent US sanctions. However, these efforts have been limited to non-sanctioned products since the US withdrew from JCPOA in May 2018, with German-Iranian trade in Q1 2019 falling by 49 per cent year-on-year. It remains to be seen how the European countries can save the deal, with the proposed SPV INSTEX seemingly far from completion. The United States is likely to take further punitive action.

On 27 June Switzerland agreed to facilitate dialogue between the government of Cameroon and Anglophone separatist groups with a view to ending violence in the country’s Southwest and Northwest regions. The Swiss government revealed that two meetings had already taken place at the request of the parties. Nearly 1900 people have been killed since late 2017, when protests over the perceived discrimination of English speakers by Cameroon’s francophone central government descended into violence, giving rise to the emergence of a secessionist movement. The Swiss mediation effort offers the best hope for de-escalation since the outbreak of large-scale violence. The government has recently softened its stance on decentralisation – a step it had previously rejected. Nonetheless, with separatists firm in their demand for an independent state, a peaceful resolution is far from certain.