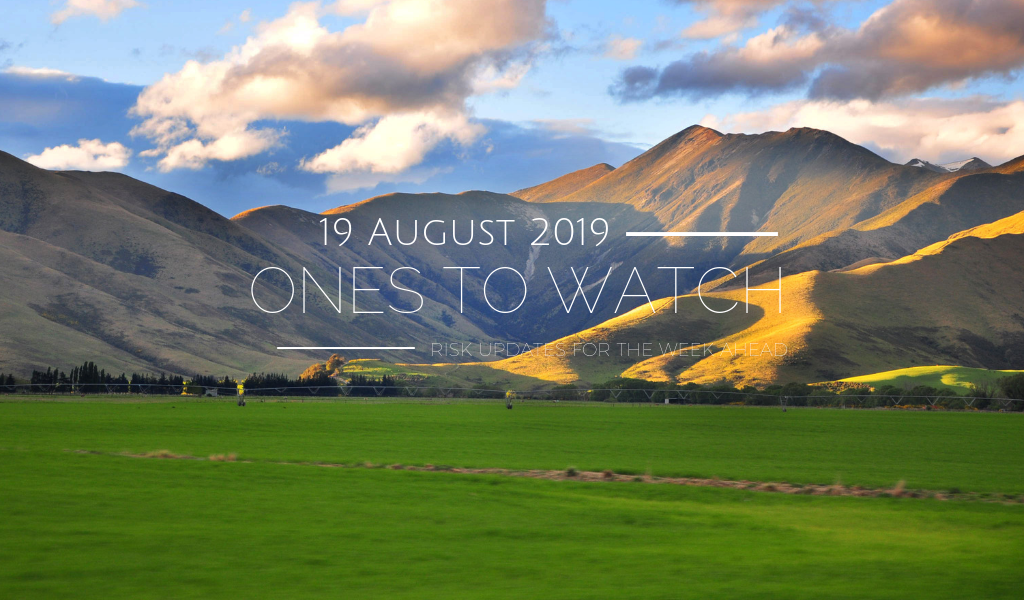 In Argentina, further financial turmoil is expected in the lead up to and after the upcoming 27 October general elections in which President Mauricio Macri seems increasingly unlikely to be re-elected. On 17 August Nicolas Dujovne resigned as economy minister citing the need of ‘significant renewal in the economic area’ following the stunning defeat of Macri’s coalition in the 11 August primary elections, considered a test run for the upcoming October vote. Dujovne was replaced by Buenos Aires province Economy Minister Hernan Lacunza. The repayment terms of the US$57bln Stand-By Arrangement with the IMF are increasingly likely to be renegotiated should opposition leftist Alberto Fernandez win the presidency. On 16 August Fitch Ratings cut the sovereign rating a massive three notches to CCC, and S&P one to B- from B. Concerns over a potential debt restructuring or sovereign default will persist.

On 19 August protests erupted in Manokwari, West Papua and in Jayapura, Papua, Indonesia’s two easternmost provinces. The unrest was triggered by the detention of at least 43 Papuan students in Surabaya on 17 August after a standoff over allegations the Indonesian flag outside the university dormitory was removed during the celebration of Indonesia’s Independence Day. Police fired tear gas into dormitories and officers reportedly directed racial slurs at the students. Protests turned violent in Manokwari as around 150 people blocked streets and set fire to the legislative council building. The unrest paralysed parts of the city centre and nearby port. The turnout in Jayapura reached 500 but remained peaceful. A separatist movement has simmered for decades in the region, where Free Papua Movement (OPM) rebels carry out frequent attacks on security forces and non-indigenous assets. There remains a high risk of violent unrest in urban areas in Papua and West Papua.

Rumours in Washington D.C suggest the Trump Administration is to tweak sanctions on Russia’s Rosneft, which is currently under only sectoral sanctions that bar long term financing or cooperating with the firm on deep offshore, fracking, and Arctic drilling. The Treasury Department reportedly on 15 August overruled earlier State Department suggestions but additional proposals are being considered to punish the firm for continuing to do business with Venezuela, including potentially sanctioning Rosneft Trading. Meanwhile, Tajikistan’s National Bank is to introduce its own payment system effective 1 September, essentially banning foreign services from directly accessing the country’s payment system. Tajikistan receives some US$2.5bln in transfers annually, predominantly from Russia. The new system would provide a way for the near-bankrupt Tajik government to shore up its finances by requiring large deposits to be drawn on but may anger Moscow.

Italy’s populist Five Star Movement (M5S) and the centre-left Democrats, historically their main opponent, have spent the past week blocking the far-right League from calling a vote of no-confidence in the collapsed M5S-League government. The move raises the prospect of a M5S-Democratic Party government but this would have to pass the heretofore seemingly insurmountable hurdle of being approved by M5S members first, though it is clear the party would be heavily defeated in a snap election. Meanwhile Moldova’s reform agenda is likely to grind to a halt just two months after it was launched after a longtime Socialist MP seen as highly corrupt was appointed to head the Constitutional Court. Britain also faces weeks of tumult as Prime Minister Boris Johnson’s government’s no-deal Brexit forecasts leaked while the prospect has emerged of the opposition forming an alternative government.

On 18 August Saudi Arabia’s state oil behemoth Aramco announced that a “limited fire” had erupted at its Shaybah oil and gas field near the UAE border, more than 1,000 km from Yemen, adding that no casualties or significant disruption were caused. The Yemen-based Huthi movement, claimed responsibility, which would be a major escalation of its ability to strike deep within Saudi Arabia. Such attacks are likely to continue and could potentially undermine global oil trade, despite Saudi attempts at reassurance. Meanwhile Turkey sent a convoy into Syria’s Idlib province on 18-19 August as well to attempt to deter the Assad regime from taking over the territory but this now appears increasingly to be a foregone conclusion, with the efforts launched last year to attempt to demilitarize the zone all-but-collapsed.

Hundreds of police were deployed to Zimbabwe’s second city of Bulawayo to enforce a ban on protests planned by the opposition Movement for Democratic Change (MDC) on 19 August. Public anger over fuel price hikes and deteriorating economic conditions has been rising, with hundreds having mobilised in spontaneous protests in Harare since last week despite police bans. The Zimbabwe Association of Doctors for Human Rights said its members had treated 172 people for wounds sustained in clashes with security forces since 12 August. Although the government’s show of force led the MDC to call of the rally, the potential for violent escalation remains high. Meanwhile, the Southern African Development Community has called on the US and EU to lift sanctions imposed in 2002 against Zimbabwean government officials and entities. Given unabating government repression, this is an unlikely prospect