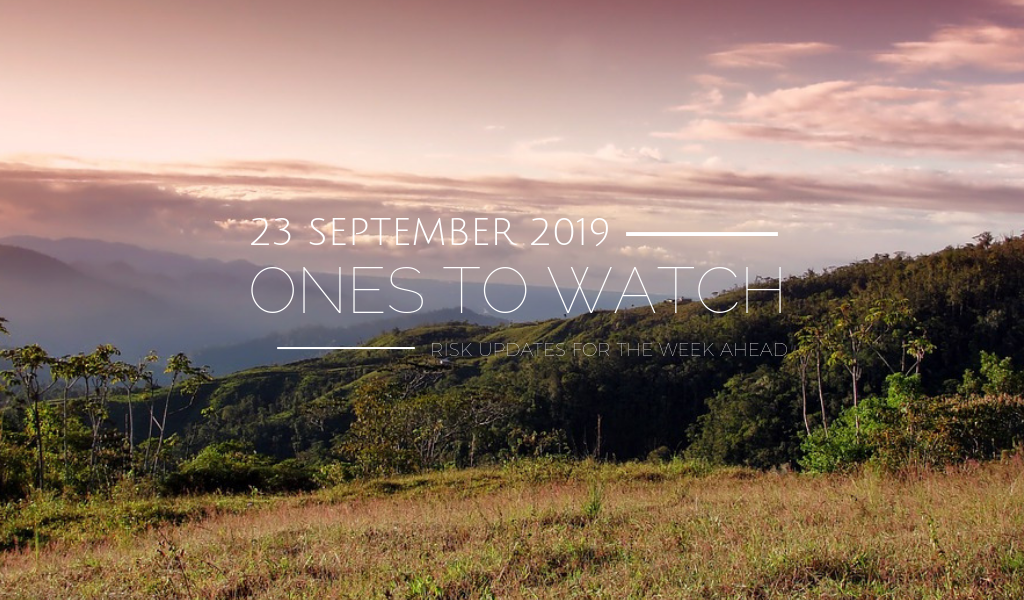 In Guyana, the government could announce a long-delayed snap general election date over the coming week. President David Granger scheduled a full Cabinet meeting for 24 September after GECOM, Guyana’s independent electoral body, stated that elections could be held after end-February 2020. On 19 September US and EU diplomats issued a statement declaring the government in breach of the constitution as Granger lost a vote of no confidence in December 2018 that constitutionally triggered the need to call for snap elections within three months. Policy uncertainty and the risk of contract reviews will increase should the left-wing opposition People’s Progressive Party (PPP) secure the presidency. The new administration will decide on how to proceed regarding upcoming and  already granted oil contracts including to ExxonMobil, expected to begin major offshore oil production in early 2020. Political risks will continue to heighten.

On 20 September Indonesian President Joko ‘Jokowi’ Widodo called on the House of Representatives to halt the passage of controversial revisions to the Criminal Code (KUHP). The changes, which would have applied to foreigners, included making it illegal for women to walk down the street at night and criminalised extramarital sex and cohabitation. They would also have re-introduced penalties for insulting the president, vice president and state institutions. Jokowi noted 14 articles in the revisions that needed to be addressed, acknowledging major public opposition. The amendments highlights growing conservative attitudes by key policymakers and society in general. Parliament was due to ratify the changes on 24 September, and Islamic-based parties continue to push for the ratification to proceed. It remains unclear why Jokowi allowed senior ministers to agree to the conservative changes, only to change course at the eleventh hour.

Ukraine’s Defence Ministry announced on 21 September that a plan is being developed to withdraw soldiers and equipment from the Donbas contact line. The withdrawals are only at the planning stage, with such plans likely to form the basis of future peace talks. Plans for internationally-mediated talks between President Volodymyr Zelensky and Russian President Vladimir Putin continue to be floated, but not confirmed. Any such withdrawal would risk protests in central and western Ukraine in response. In Kazakhstan police detained approximately 100 people in Nur-Sultan, Almaty and five other cities during opposition rallies against Chinese investment and the ex-president Nursultan Nazarbayev’s continuing influence over the political system. Despite President Kassym-Jomart Tokayev lifting restrictions on peaceful protests earlier in September, police crackdowns continue. Protests are likely later in the week, though there is a low probability of any escalation.

Austrian voters go to the polls on 29 September, with former Chancellor Sebastian Kurz likely to lead his right-wing People’s Party to victory. The far-right Freedom Party, whose leader resigned earlier this year following a corruption scandal, is campaigning to renew its coalition with Kurz. However, Kurz could seek an alliance with the centrist liberal Neos and even the Greens, though there are doubts this is feasible. France is set for renewed wave of ‘Yellow Vest’-related unrest after the largest such protests in months took place on 21 September. No major process on Britain’s efforts to leave the EU has taken place as the bloc rejected Prime Minister Boris Johnson’s backstop alternatives and the Supreme Court may rule on 23 September that Johnson lied to the Queen in an effort to advance his Brexit strategy. Major political turbulence will continue.

Momentum in Egypt’s protests will likely grow in the coming days and weeks as widespread dissatisfaction with the government was unleashed by the airing of videos in which President Abdul Fattah al- Sisi and his military cabal was accused of wasting public funds. Security forces met protesters in Suez with tanks, tear gas and live rounds. Hundreds are being detained and media outlets cut off. Protest slogans mimic those of the 2011 ‘Arab Spring’ revolutions that toppled ex-president Husni Mubarak, heightening the risk of a major crackdown in response. Related developments could severely impact foreign investment. Elsewhere the final outcome of Israel’s second general election in 2019 will be announced on 24 September. President Reuven Rivlin is consulting leading parties to determine whether Prime Minister Netanyahu can build a coalition to lead the Knesset for a fifth term.

Ethiopia’s National Intelligence and Security Service (NISS) said on 21 September it had captured ‘dozens’ of militants belonging to Somalia-based extremist group al-Shabaab and Islamic State (IS) in the capital Addis Ababa and in the Oromia and Somali regions. The men reportedly entered the country via Djibouti and Somaliland and were plotting attacks on hotels and religious festivities in Addis Ababa and other cities. The arrests followed a major security operation aimed at eradicating terrorist cells across the country. Although Ethiopia has thus far largely been spared from Islamist militant violence, Al-Shabaab has repeatedly threatened to carry out attacks in Ethiopia in retaliation for its participation in the African Union’s AMISOM stabilisation mission in Somalia. As ties between Addis Ababa and Mogadishu grow stronger, the risk of extremist attacks in Ethiopia is likely to increase further.