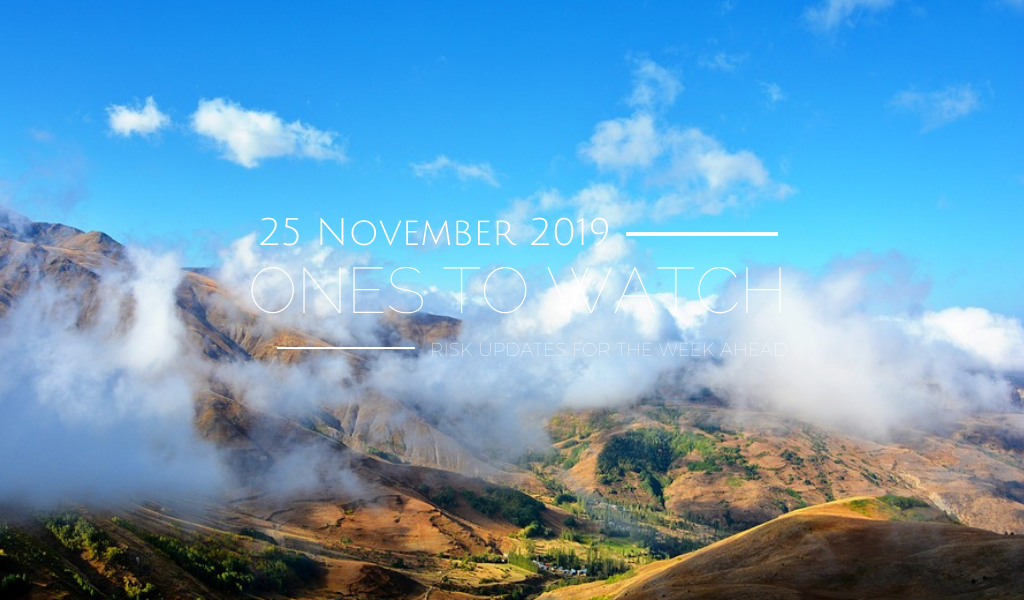 In Uruguay, preliminary results of the 24 November presidential runoff vote showed conservative lawyer Luis Lacalle Pou of the centre-right National Party ahead of Daniel Martinez of the ruling Broad Front coalition. With 99.41 per cent of the ballots counted, Lacalle Pou had secured 48.74 per cent of the votes and Martinez 47.47 per cent. Although Martinez won the first round by a ten-point lead, Lacalle Pou gained the support of four other parties in the second-round. Once confirmed, Lacalle Pou’s victory would end around 15 years of centre-left rule marked by stability and growth. The incoming administration will face a polarised environment in which coalition building will be key to tackle key issues such as increasing crime rates and recent sluggish economic growth. Nevertheless, broad policy continuity is expected. The final results will be published over the coming days.

On 23 November reports emerged that Chinese national Wang ‘William’ Liqiang applied for asylum in Australia after claiming he was a spy and providing a sworn statement outlining China’s covert operations. The statement detailed espionage activities, including efforts to influence Taiwanese elections, abductions in Hong Kong and the infiltration of Hong Kong’s pro-democracy movement. It also detailed operations in Australia. A Chinese operative reportedly offered US$1m to Liberal party member Nick Zhao to run for federal parliament in a Melbourne suburb. Zhao was found dead in a Melbourne hotel room in March 2019 after he reportedly approached ASIO to discuss the plot. Wang’s statement confirms long-held assumptions that China actively seeks to infiltrate foreign countries in areas such as politics, military, business and culture. Wang is the first Chinese intelligence operative to defect. China maintains Wang is a fraudster.

On 22 November Ukraine failed to reach an agreement with the IMF over a new loan programme for the second time. The IMF criticised the talks between President Volodymyr Zelensky’s administration and oligarch Ihor Kolomoisky, who is seeking to reclaim control of Privatbank, nationalised from him in 2016. Despite the government regularly stating that the bank’s ownership would not be returned, Kolomoisky has regularly reiterated his intention to reclaim it. Negotiations will continue, but concerns over Kolomoisky will still cloud the talks. Meanwhile, in Kyrgyzstan over 1,000 people protested outside parliament on 25 November demanding charges be filed against businessman Raimbek Matraimov, who was accused last week of allegedly being at the centre of a US$700m money laundering and corruption scheme centred in the country. Protests could escalate, leading to a government crackdown.

Romania’s incumbent President Klaus Iohannis trounced ex-prime minister Viorica Dancila with some 66 per cent of votes in the presidential runoff on 24 November, less than two months after Dancila’s Social Democratic Party (PSD) government was ousted in a no-confidence vote. The next parliamentary election is due by March 2021 but is increasingly likely to be called early in the coming months. Snap elections would likely boost Iohanis’ Liberal Party and the USR-Plus Alliance, which are currently at the core of the government that replaced the PSD but remain dependent on smaller parties, including that of another ex-PSD prime minister, Victor Ponta, for support. Meanwhile, Germany is likely to ban Huawei from its 5G network – the last major EU country to do so – after Chancellor Angela Merkel’s party effectively endorsed the move despite her opposition on 23 November.

On 28 November Beirut is due to reimburse creditors to the tune of at least US$1.78bln in sovereign debt amid a civil and constitutional crisis which has seen Lebanese bond yields spike to all-time sovereign debt highs. While over 40 per cent of Lebanon’s sovereign debt is held by Lebanese banks and the government has pledged it has enough foreign reserves to meet obligations, the repayment will come at a cost. It will go to Lebanon’s most wealthy – the institutions and their depositors to be paid with the very funds needed to stabilise the country’s unofficial inflation and purchase strategic goods such as fuel, flour and medicine. There have been no debt restructuring discussions and although banks are betting against a default, such a move may risk further upheaval.

Voting in Guinea-Bissau’s presidential election proceeded peacefully on 24 November with preliminary results expected on 28 November. The election came amid a long-standing power struggle between President Jose Mario Vaz – who is seeking a second term – and his ruling PAIGC, escalated by Vaz’ dismissal of the entire cabinet in late October. Vaz dissolved the government saying the political situation was undermining the normal functioning of state institutions. PAIGC leader and former prime minister Domingos Simoes Pereira, whose dismissal by Vaz in 2015 triggered the ongoing political crisis, is considered the favorite. Although Vaz and Pereria stated that they would accept the results, there is uncertainty in the validity of their statements and an elevated risk of political instability remains. The risk of a coup attempt cannot be ruled out.