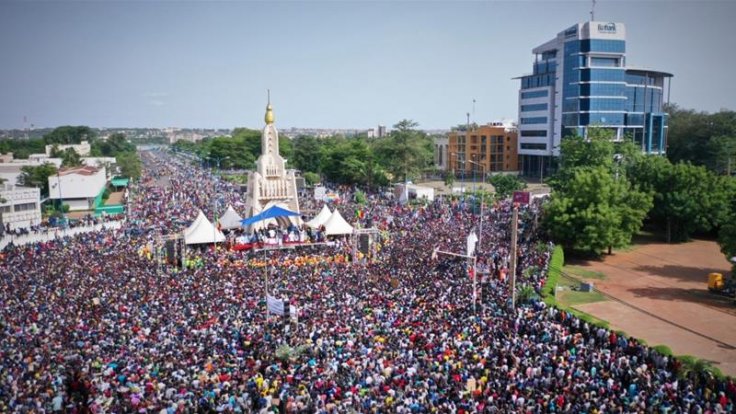 Mali’s political crisis took a new twist on 19 August when President Ibrahim Boubacar Keita was forced to resign following a putsch by a group of army colonels calling themselves the National Committee for the Salvation of the People (CNSP). A day earlier, the mutineers took control of a military base outside Bamako and arrested senior government officials including Keita and Prime Minister Boubou Cisse, claiming to execute the will of the people. As word of Keita’s arrest spread, thousands thronged the streets of central Bamako in celebration.

The unloved president’s ouster follows months of demonstrations calling for the government’s resignation over unabating violence, widespread poverty and allegations of irregularities in March and April’s legislative polls. Mediation by the Economic Community of West African States (ECOWAS) in July failed to produce a compromise with the opposition M5-RFP movement, creating a crippling political stalemate.

Keita’s deposition has removed one obstacle but spawned a host of new ones. The African Union and ECOWAS have suspended Mali’s membership while the Central Bank of West African States temporarily closed its Mali branch. The country’s international partners have refused to recognise the new leadership, expecting a repeat of Mali’s previous irregular transition. In 2012, in what increasingly appears to be a blueprint for current events, mutineers ousted then-president Amadou Toumani Toure over his failure to quash a Tuareg insurgency in northern Mali. Under international pressure, the military junta withdrew to clear the way for elections that saw President Keita voted into office, but the chaos allowed Islamist militants to hijack the rebellion, precipitating Mali’s current security crisis.

On 23 August ECOWAS dispatched a delegation led by former Nigerian president Goodluck Jonathan to Bamako to push for the ousted government’s reinstatement. Predictably, the talks ended without an agreement. Given his lack of popular support, Keita’s return to power was never a realistic option. Though the junta has promised to restore civilian rule in the near future, it is evident that any agreement will be on the CNSP’s terms.

Keita has since let it be known that he no longer wishes to resume his duties. The announcement allows ECOWAS to discuss alternative solutions without losing face, opening the door for a potential compromise on a transitional government. Nonetheless, the military’s role in a future interim administration and the duration of the transitional period will remain contentious issues in further negotiations.

Either way, Keita’s deposition is unlikely to prove a panacea for Mali’s dismal security situation. Political uncertainty following the coup and the impact of the COVID-19 crisis threaten to exacerbate a lack of funding for the security forces and the absence of state structures from swathes of the country. In the worst case, a prolonged period of instability could open an inroad into the country’s relatively stable south for militant groups operating in central and northern Mali. Moreover, a stronger role for the military is no guarantee of security, given that government soldiers are frequently involved in massacres of ethnic Fulani, driving the latter into the arms of militant groups and stoking ethnic strife.

France and EU partners could pledge further financial and military support to avert Mali’s descent into chaos, but this will be contingent on the appointment of an internationally acceptable transitional government and will need to be complemented by a strategy to bring economic opportunity and political representation to Mali’s neglected periphery.