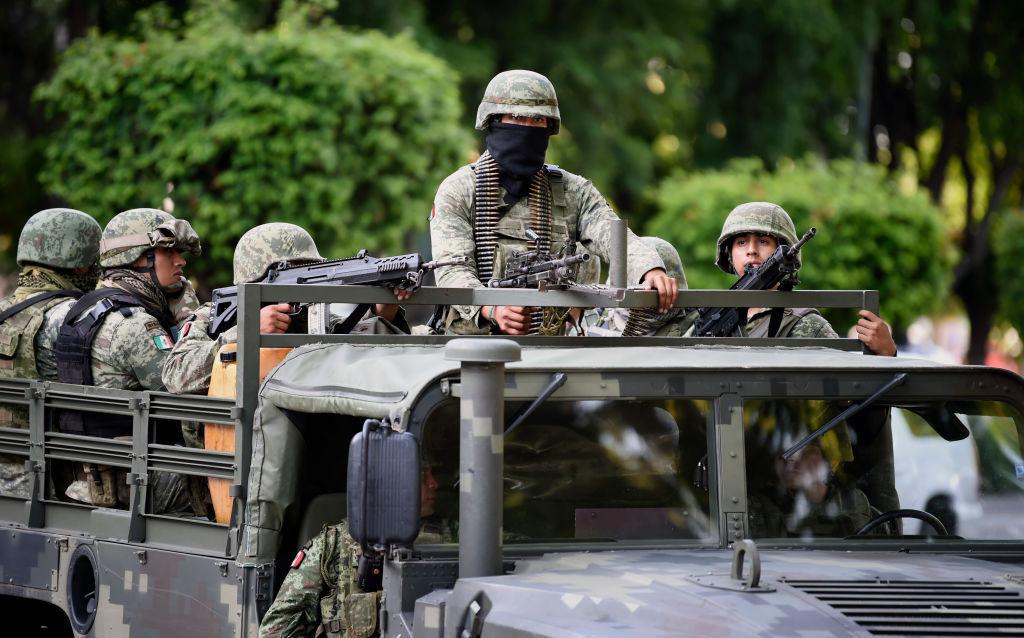 There seems to be no silver bullet to curb – let alone end – Mexico’s organised crime-related violence. The country, amongst Latin America’s most severely hit by the COVID-19 pandemic, has been posting record-high levels of violence on a yearly basis for the last three years, with 2020 on track to surpass 2019’s mark. Security risks associated with organised crime including homicides, extortion, fuel theft and attacks directly or collaterally affecting businesses and civilians have not shown signs of significantly declining during the pandemic and its associated containment restrictions. In fact, the COVID-19-related disruption has allowed organised criminal groups to expand their territorial control with impunity and to further engage in violent turf wars, taking advantage of the diversion of security force resources to non-crime related tasks. Extortion and violence appear to have increased particularly in the capital Mexico City, which has historically been largely insulated from overt cartel violence as seen elsewhere in the country.

President Andres Manuel Lopez Obrador (AMLO) has struggled to control rampant violent crime. On 1 September he admitted that homicides and extortion linked to organised criminal groups had increased since his administration took office in late 2018. According to official data, homicides rose by 7.9 per cent to 20,494 cases in the first seven months of 2020 year-on-year. A total of 34,582 homicides were reported in 2019 compared to 33,341 of 2018 which had also surpassed the 2017 level. The daily records of 114 and 117 homicides on 20 April and 7 June respectively suggest that COVID-19 has done little to modify the trend.

Soaring crime rates and the government’s inability to effectively tackle organised crime have been partially blamed on AMLO’s non-confrontational security strategy. The government has tried to break away from the heavy-handed strategy implemented by previous administrations. AMLO has been under increasing pressure over his ‘hugs, not bullets’ policy, which has put an emphasis on job creation schemes and other social programmes as tools to address the root causes of criminal activity. In 2019 the government created the National Guard (NG), an 80,000-strong security force which was meant to fight organised crime under civilian command. However, the NG has so far mostly focused on targeting fuel theft and on rounding up Central American immigrants amid growing pressure from the United States (US) to control migration flows, instead of taking a significant role in organised crime-related operations.

Such operations, however, are not a guarantee for success either. Recent precedent demonstrates that when large cartels are severely hit by security operations, several splinters groups emerge which leads to even higher levels of violence. The high-profile arrest of Jose Antonio ‘El Marro’ Yepez Ortiz, the leader of the Cartel Santa Rosa de Lima (CSRL), on 2 August did little to quell the violence in Guanajuato state. Dozens of people were killed in shootings in the days that followed the operation, raising concerns over the CSRL’s potential fragmentation. The government’s powerlessness vis-a-vis the criminal underworld was brazenly displayed during the October 2019 botched arrest of Ovidio Guzman, the son of former Sinaloa cartel leader Joaquin ‘El Chapo’ Guzman. Ovidio was detained in the northern city of Culiacan and was freed only hours later after hundreds of gunmen launched a wave of attacks on security forces and blocked roads with burning vehicles across the city.

Much of the ongoing violence has been associated with the splintering of a few powerful cartels – including Los Zetas, the Gulf Cartel, and La Familia Michoacana – which dominated Mexico’s illicit markets, before the ‘War on drugs’ was launched in 2006. The Cartel Jalisco Nueva Generacion (CJNG), one of Mexico’s largest and most aggressive, split from the Sinaloa Cartel in 2010 and currently controls much of country’s cocaine and synthetic drug trafficking. On 24 August over a tonne of cocaine allegedly belonging to the CJNG was seized from a submarine off the shore of Colombia, suggesting that the cartel has to a degree managed to continue with its international trafficking operations despite COVID-19-related border closures and movement restrictions.

Rivalry between criminal groups appears to have accelerated in recent months and has contributed to spikes in violence. Guanajuato state has been particularly affected, as the CJNG and CSRL fight for turf. On 19 June at least eight bystanders, including two children, were killed amid clashes between the two. CSRL’s strong focus on fuel theft is likely a major driver of the government’s decision to prioritise their targeting of the group amid ongoing efforts to tackle fuel theft. Estimates suggest that at its height, the CSRL could illegally extract fuel from assets belonging to state-owned oil firm Pemex bringing in profits of around US$1m a day.

The number of organised criminal groups operating in Mexico City has increased. The capital, which has one of the country’s highest police-per-population ratios, registered over 1,500 homicides in 2019, the highest record in 25 years. Drug cartels such as the CJNG are reportedly increasing their presence, which could lead to further confrontations with other groups, including La Union Tepito, the capital’s most relevant. On 26 June CJNG members ambushed Mexico City’s police chief and secretary of public security, Omar Garcia Harfuch, seriously wounding him and killing two bodyguards and a bystander. Intent and capabilities are being increasingly demonstrated.

Cartels have capitalised on the socio-economic grievances triggered by the COVID-19 pandemic. They have imposed curfews in territory under their control and have provided aid to local communities to expand their support base amid growing public discontent over AMLO’s handling of the crisis. In April La Familia Michoacana reportedly handed out food bags, known as ‘narco despensas’ to local residents in Michoacan state. In June the CJNG reportedly distributed toys to children in Veracruz, while also delivering food packages in Mexico’s second-largest city Guadalajara and elsewhere. On 27 July local media reported that authorities had located a hospital in El Alcihuatl, Jalisco state, allegedly built by the CJNG.

The disruption caused by COVID-19 appears to have accelerated certain crime-related risks facing businesses such as extortion, attacks, piracy and fuel and natural gas theft. Criminals have exploited the security void left by security forces who have been reassigned to carry out essential pandemic-related tasks. Reports from July suggest that around 50 per cent of the 173,776 available staff of the three federal forces – including the Navy, the Army and the National Guard – has been assigned to non-crime fighting duties.

The aforementioned risks are not new to companies operating in the mining, oil, energy, retail and manufacturing sectors. In October 2019 Canada’s Torex Gold Resources CEO stated that the presence of organised crime and weak rule of law had prompted the firm to sell off some of its mining assets. In early May the company stated that organised crime activities could interrupt its operations at the El Limon-Los Guajes and the Media Luna gold mines in Guerrero state. On 12 May Mexican labour campaigner and former Media Luna mine employee Oscar Ontiveros Martinez was murdered by alleged organised crime groups. The circumstances of his death were unclear, but his family alleged it was linked to a 2017-2018 labour strike at the mine.

Extortion remains one of the most pressing risks businesses face, one that has a considerable potential to increase. Official figures show that reported extortions reached 4,729 cases by end-July, only slightly down from the 5,148 cases reported between January and July 2019. While most incidents were registered in Mexico, Veracruz and Jalisco states, extortion has also risen in Mexico City in recent years. In March local shop and street vendors urged the city’s mayor to request NG presence in the city centre as La Union Tepito gang allegedly ramped up extortion demands. Between 19 and 30 April alleged extortionists killed two transport drivers and set a truck on fire in three separate attacks in the city’s San Lorenzo neighbourhood and on the transport route to the nearby city of Chimalhuacan.

Both small local and large multinationals face extortion risks, with some being forced to shut down or move location when unable or unwilling to make the demanded payments. Between 7-9 July armed assailants carried out several attacks against Mexican multinational bakery product manufacturing company Bimbo in Ciudad Victoria, Tamaulipas state. At least three Bimbo trucks were burned and the company’s facilities attacked with firearms after the company refused to pay alleged extortion fees. In September 2019 a Ford Motors shop in Celaya was attacked by gunmen. The shop closed down a few days later under fears of future attacks. On 12 June 2018 Pepsi closed its operations in Ciudad Altamirano, Guerrero state, due to extortion attempts and insecurity, just months after Coca Cola closed its operations at the same city due to extortion and two targeted attacks at its facilities.

Fuel theft, locally known as ‘huachicoleo’, continues to pose risks to oil industry personnel and often leads to infrastructure damage, particularly for pipeline-related assets. Despite successive crackdowns on fuel thieves, demonstrated by a 91 per cent decrease in registered thefts in 2019, Pemex reported a 114 per cent year-on-year increase in illegal tapping during the first four months of 2020. The government’s focus on fuel theft has brought unwelcome side effects as criminal groups adapt and diversify their operations. Recent reports suggest that the CSRL, which previously mainly focused on ‘huachicoleo’, has increasingly expanded its criminal portfolio to kidnapping, contract killings, extortion, money laundering, drug trafficking and gas theft, known as ‘gaschicol’. Pemex reported 939 cases of illegal liquefied petroleum gas (LPG) taps during H1 2020, an 82 per cent increase from H1 2019. In July the Mexican Natural Gas Association Amexgas warned about the increase of ‘gaschicol’, which reportedly caused losses worth MXN13bln (US$600m) in 2019.

Piracy attacks are a growing concern in the Gulf of Mexico and have continued to increase throughout the pandemic so far. Foreign investment in the offshore oil sector could be affected by these incidents. On 17 April the US Maritime Administration issued an alert over a maritime threat off the shore of Ciudad Del Carmen and Dos Bocas in the Bay of Campeche area. The warning followed four piracy incidents that took place 4 and 14 April, all involving attacks on offshore support vessels and some leading to injuries. Although only four piracy incidents have been reported to the International Chamber of Commerce’s International Maritime Bureau’s Piracy Reporting Center (IMB PRC) so far in 2020, the real number is likely much higher due to heavy underreporting and weak ocean governance. The International Transport Workers’ Federation (ITF) reported that an average of 16 attacks a month were registered between January and September 2019 in the Campeche area.

With Mexico facing a record-breaking and potentially double-digit contraction in 2020 – mostly due to the impact of the COVID-19 pandemic – AMLO’s promises to tackle violent crime through economic assistance and growth seem more unreachable than ever. It will take years to recover from the current crisis, making anti-crime efforts even more challenging as economic hardship compounded by the lack of a sound security strategy has been known to provide fertile ground for organised criminal groups to thrive.