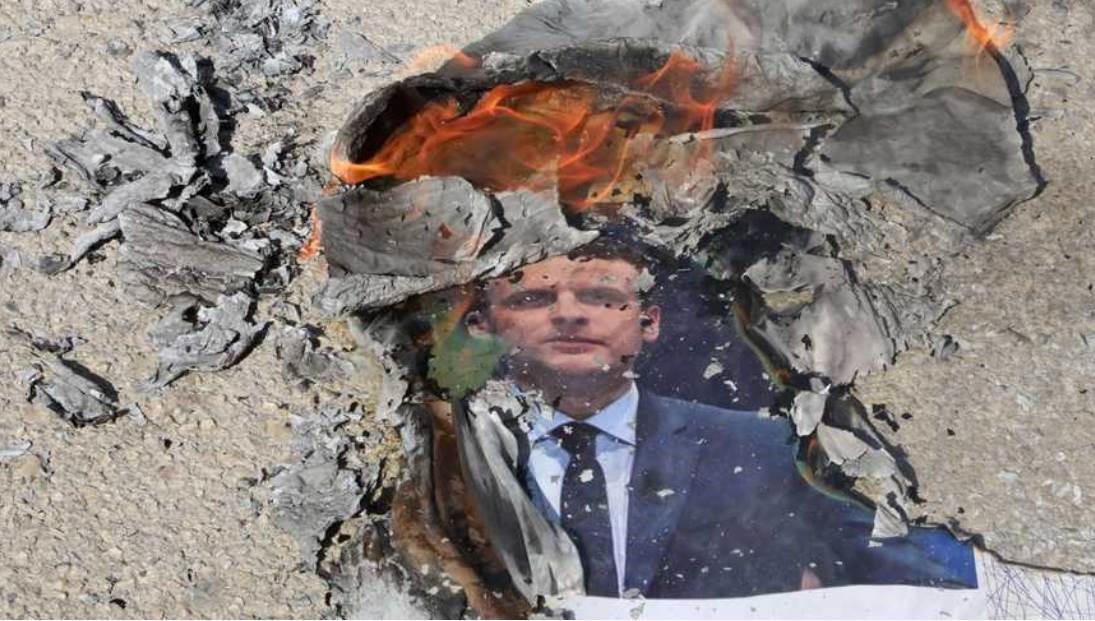 On 16 October French schoolteacher Samuel Paty was beheaded in Conflans-Sainte-Honorine, Paris, in what President Emmanuel Macron later decried as an “Islamist terror attack”. The 18-year old male attacker was later shot dead by police. The reason for the attack was that Paty had shown his class cartoons of the Muslim Prophet Muhammad – the depiction of whom is prohibited in Islam – by satirical magazine Charlie Hebdo which inspired triggered retaliatory terror attacks in 2015. In September, a man with a meat cleaver attacked two people at the site of the former Charlie Hebdo offices. Following Paty’s murder, Macron defended France’s secularism and freedom of expression, the French right to depict the prophet in cartoons and stated that Islam was suffering a crisis.

This triggered series of boycotts, protests and diplomatic repercussions across the Muslim world. Kuwait and Qatar took French goods off their shelves, Islamabad summoned the French ambassador and Turkish President Recep Tayyip Erdogan condemned Macron and Ankara said it would take all legal and diplomatic steps against Paris. This caused Paris to recall their French ambassador. Hundreds if not thousands strong protests erupted across Turkey, Yemen, Iraq, Libya, Syria, Israel, Lebanon, Palestinian territories and Bangladesh. In most, French flags and pictures of Macron were burned and trampled.

Furthermore there have now been at least four attacks which appear connected. On 20 October two Muslim women were stabbed repeatedly under the Eiffel Tower, and their attackers charged with attempted murder. On 25 October three people were killed in a knife attack at Notre Dame church in Nice, southern France, which was described as a terrorist incident. Later that day a guard outside the French Embassy in Jeddah, Saudi Arabia was stabbed. On 29 October, Paris issued a worldwide consular message warning of the increased threat of terrorism against French nationals. On 31 October a priest of the Greek Orthodox Church was shot twice with a sawn-off shotgun in France’s Lyon, causing Macron to deploy extra troops to at-risk locations. Most recently on 2 November four civilians were killed and a dozen wounded in a suspected terror attack in six locations across Vienna, Austria. The gunman was identified as an Islamic State (IS) sympathiser. The Vienna attack appears somewhat separate from the previous four lone-wolf attacks, but the timing indicates a connection.

Macron has since attempted to assuage the furore in a broadcast with Qatar’s ‘Al-Jazeera’ news. The United Arab Emirates’ (UAE) foreign minister said that Macron was right to condemn the isolation of Muslims in the West, which Macron attributed for Paty’s attack. From a business perspective, Erdogan is likely to double down on the boycott given his pre-existing disputes with Macron on Libya, East Mediterranean and Nagorno-Karabakh. Qatar and Kuwait could continue to encourage the boycott on the street but are unlikely to cancel significant bilateral deals, including Qatar’s 2018 US$2.7bln weapons purchase from France. Neither Riyadh, Muscat nor Manama have spoken out strongly against Paris.

Yet the wider row highlights numerous areas of debate including the delicacy between free expression, secularism, intolerance – both real and perceived, the nature of Muslim inclusion in Western countries, Islamist radicalism and radicalisation. The fall out for France and indeed European counties might not yet be over, demonstrating the repercussions that even a potentially innocuous comment can have in security, diplomatic and economic spheres.