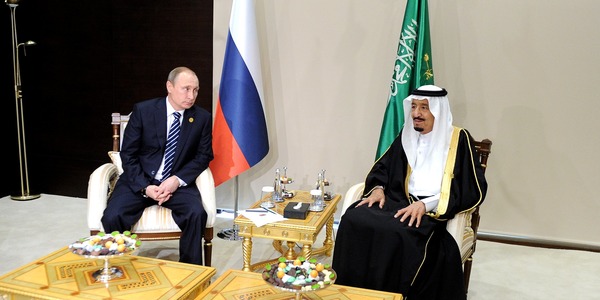 Riyadh’s and Moscow’s oil alliance is over a year old and is scheduled to last until the end of 2018. Notably, the OPEC-Russia deal will be reviewed at the 22 June OPEC meeting. Saudi Arabia and Moscow have courted one another openly in recent years, although cooperation has not expanded much beyond the oil deal. A number of factors could see the deal end early, which may grow increasingly likely if current trends that could stoke new tensions between the two countries continue. Ultimately, factors outside of energy markets, and Russia’s aim to ensure price stability even without a deal, mean that a June exit from the deal should be seen at least as rather plausible, if not yet probable.

The November 2016 OPEC-Russia deal made sense from both capitals’ standpoints. Russia was suffering from a two-year recession stemming from the downturn in global energy prices and the sanctions that resulted from its 2014 invasion of Ukraine. Riyadh meanwhile also worried about the impact of lower oil prices and concerns that OPEC would lose its status as the market’s ‘swing producer’ amid rapidly-growing US shale output. The deal has by-and-large proven a success as well.

However, cooperation has been more limited than the headline price per barrel would indicate. Russia produced a record 10.98m barrels per day in 2017, a post-Soviet record and the ninth consecutive year of increases. Russia had ramped up production levels in the weeks leading up to the initial OPEC deal. This has largely been met with silence from other members of the deal because Russia has also cut back slightly on exports. Under the deal production is supposed to be capped at 10.93m barrels per day.

Efforts to expand bilateral cooperation into other sectors have yet to bear fruit, and are ultimately unlikely to recast Riyadh and Moscow’s relationship despite King Salman becoming the first-ever sitting Saudi monarch to visit Russia in October 2017. Yet the two only agreed US$3bln in join investment deals, with a paltry US$1bln pledged to a joint energy investment fund and US$1.1bln for Sibur – part-owned by President Vladimir Putin’s son-in-law – to build a petrochemicals plant in Saudi Arabia. For the world’s two largest oil producers, the deals are hardly notable and insufficient to indicate a true willingness to deepen ties.

Saudi Arabia and Russia are separated by several geopolitical divides, most notably over Iran, which Russia sees as an ally in both political and defence matters. Russia’s armed forces cooperate with Iranian militia in Syria while the Saudi government supports their opponents. Interestingly, Salman’s October visit to Moscow did result in a memorandum of understanding on buying Russia’s state-of-the art S-400 anti-air missile system. Saudi Arabia long opposed the sale of its predecessor system, the S-300, to Tehran, but Iran does have air attack capabilities comparable to Riyadh’s. Moreover, Russia is still privately unsure the deal will ultimately go through, given US lobbying for Saudi Arabia to purchase American competitor systems instead.

One final factor could also affect the atmosphere ahead of the 22 June OPEC Meeting. On 14 June the Football World Cup gets under way at Moscow’s Luzhniki Stadium; the opponents: Russia and Saudi Arabia.