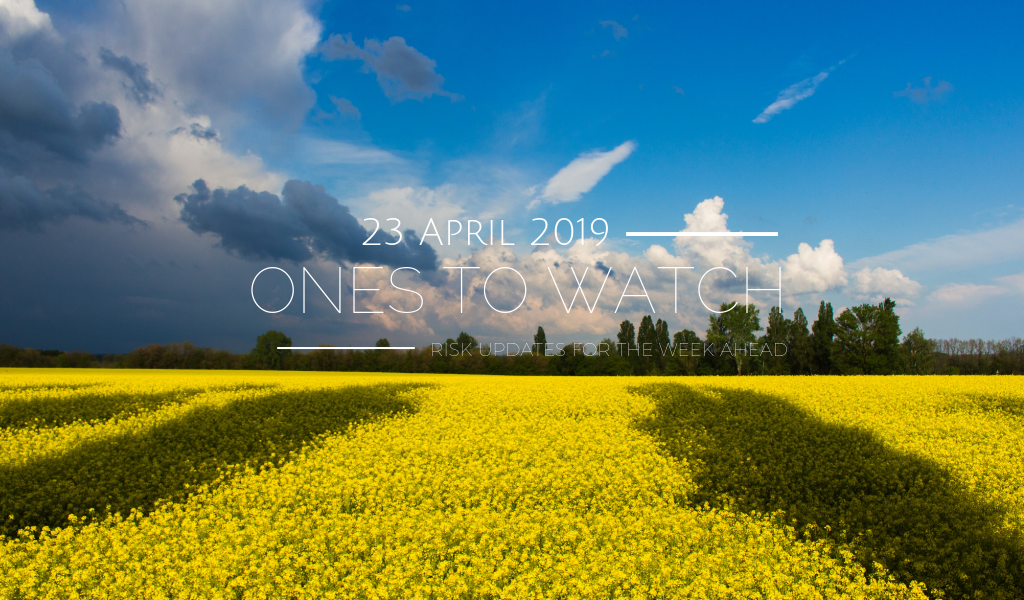 In Argentina, the centre-right Mauricio Macri administration continues its commitment to control soaring inflation and to reduce budget deficit as part of the 2018 US$56bln Stand-by Agreement with the IMF. On 17 April Macri announced an agreement with retailers to freeze prices of 60 ‘essential’ stable products for at least 6 months. The measure intends to curb inflation, currently at 55 per cent at a 12-month rate and 4.7 per cent in March alone, and to appease voters whose purchasing power has been hit the hardest ahead of the upcoming 27 October general elections. On 16 April the central bank announced new measures to help control inflation, by holding the currency band at its current levels until the end of the year and reinforcing the bank’s commitment to currency stability. High inflation remains a major concern.

The 21 April terrorist attacks across Sri Lanka resulted in at least 321 deaths and raise concerns over a new Islamist extremist movement in the country. Sri Lanka has long seen sectarian and intercommunal violence, though suicide bombings largely ended when the government brutally put down the majority-Hindu Tamil independence movement a decade ago. Tamil separatists also attacked hotels, as in the latest bombings. However, the targeting of Christians celebrating Easter is unprecedented in the country. Security forces blame a previously little known domestic group, National Thowheeth Jama’ath (NTS), saying it received support from an ‘international network’, and on 23 April Islamic State (IS) claimed responsibility. More bombs were found on 22 April and 40 arrests made. The continued capability of IS and NTS in Sri Lanka is unknown. Alleged failures to act on intelligence risks exacerbating infighting between President Sirisena and Prime Minister Wickremesinghe.

Volodymyr Zelensky’s landslide victory, with 73 per cent of votes, in Ukraine’s 21 April presidential run-off ushers in a new political era for the country. However, the extent of this will depend on whether Zelensky’s Servant of the People party, which presently has no seats in the legislature, can cobble together a coalition after parliamentary elections due by end-October. Russia has sought to increase pressure on Zelensky by announcing that coal, petrochemical and fuel exports to Ukraine will be banned from June. Zelensky is close to oligarch Ihor Kolomoisky and his first test will be the handling of the ongoing trials around the 2016 nationalisation of PrivatBank, which was until then controlled by Kolomoisky but which collapsed after the central bank said almost its entire loan book was to related entities. Fallout from that case could also impact Ukraine’s continued ability to access IMF financing.

On 18 April journalist Lyra Mckee was shot dead on Fanad Drive while covering clashes between residents of Derry/Londonderry’s Creggan neighbourhood in Northern Ireland. Violence erupted after a police raid on a home in Mulroy Gardens, in an area of strong Republican sentiment, and residents responded with petrol bombs. The shot that killed Mckee, who was standing near a vehicle belonging to the Police Service of Northern Ireland, appeared to come from an area where Republican rioters gathered. On 22 April the New IRA admitted responsibility and a local woman was arrested. There is a risk that violence in the region could escalate, exacerbated by political issues around Brexit. Meanwhile on 22 April Britain’s Parliament returned from holiday and talks resumed between the opposition Labour party and governing Conservatives, the party grassroots of which is also in open revolt against Prime Minister Theresa May.

One of two groups claiming to represent the official Libyan government, General Khalifa Haftar’s Libyan National Army (LNA) declared on 23 April that it was calling in reservists for an escalation of the battle that has been raging in the capital Tripoli since 4 April. The LNA, loyal to the House of Representatives, has been stuck in the southern suburbs of Tripoli, some 11 km from its central Martyr’s square, for the past two weeks. Heavy shelling and gun fights between LNA and Government of National Accord (GNA) forces have seen over 250 killed, 1250 wounded and 30,000 displaced. International mitigation of the battle looks unlikely given that the UN and G7 countries back the GNA and the LNA is backed by Gulf Arab allies. The LNA has demonstrated that it has the stronger army and given Haftar’s ultimate goal to secure his legitimacy, only achievable with control of Tripoli, it is expected violence will escalate further.

In Uganda, supporters of the opposition’s rising star, musician-turned-politician Bobi Wine, clashed with police on 22 April at the One Love Beach resort outside the capital Kampala following the cancellation of Wine’s Easter shows by authorities on security grounds. Wine alleges the ban was politically motivated. Having been voted into parliament as an independent MP in 2017, Wine has repeatedly clashed with authorities, who fear his growing appeal among Uganda’s young population makes him a serious threat to President Yoweri Museveni’s rule. Wine’s arrest in 2018 led to some of the largest anti-government protest in Uganda’s recent history. The concert ban was likely in part motivated by events in Algeria and Sudan, where largely peaceful protests recently led to the ouster of long-standing presidents. With Wine under house arrest, the potential for violent escalation in the coming weeks is high.