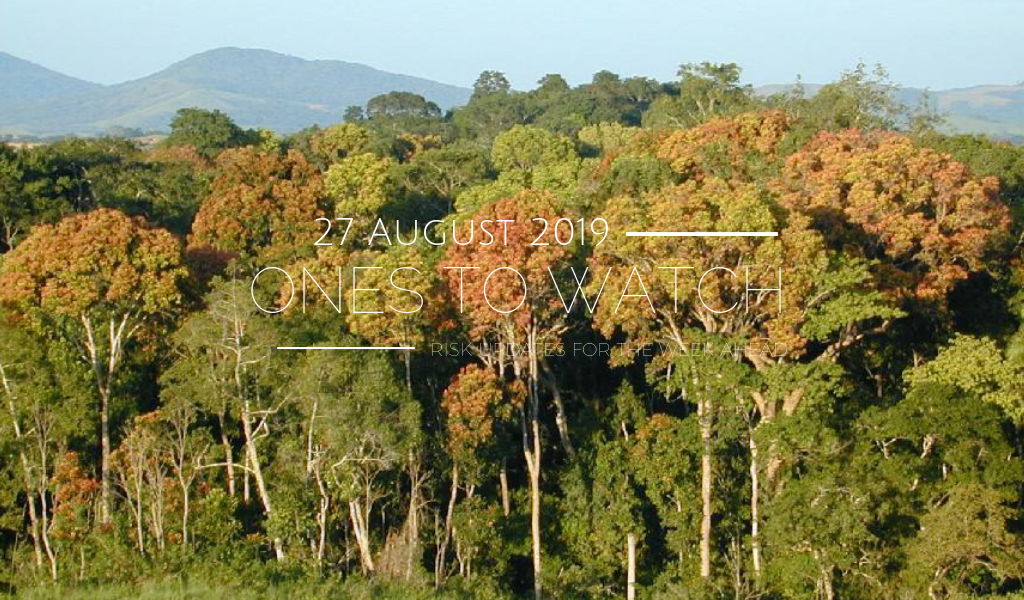 In Mexico, the government of President Andres Manuel Lopez Obrador (AMLO) is expected to announce an agreement over the coming days to resolve a lengthy conflict with energy companies over gas pipeline contracts. In late June state-owned utility CFE filed for international arbitration to review contracts with companies including Carso Energy, IEnova and TC Energy-TransCanada which were contracted under the previous administration to build seven gas pipelines. In early July the government then moved to launch negotiations with the affected companies to avoid the arbitration processes. On 26 August unofficial reports emerged suggesting that a preliminary agreement had been reached, under which Mexico would pay higher fees to ship gas through the pipelines for the next 10 years, eventually leading to nominal savings of about US$600m. Uncertainty over potential contract reviews will persist under AMLO irrespective of any agreements.

On 23 August US President Donald Trump increased tariffs rates on Chinese goods and indicated that he could force US companies to leave China via an emergency order. Starting 1 October, Trump said tariffs on US$250bln dollars of Chinese imports will be increased from 25 per cent to 30 per cent. Tariffs on US$272bln of Chinese imports scheduled for September and December, will be raised from 10 per cent to 15 per cent. The move came hours after Beijing announced increased tariffs on US$75bln of US imports. Tariffs will range from an additional 5 to 10 per cent, with a previously-withdrawn 25 per cent tariff on US car imports reintroduced, and further auto tariffs introduced. Washington’s countermeasures have further escalated the trade war. While Trump has since indicated there could be negotiations, the risk of further escalation remains high.

A major peace summit to attempt to resolve the conflict in Ukraine’s Donbas is likely as French President Emmanuel Macron on 26 August announced the return of talks between the quadrilateral Normandy format countries of Russia, Ukraine, Germany and France. Though no date has been confirmed for the summit, progress has been made following bilateral talks between Kiev and Moscow, with prisoner exchanges expected within the next fortnight. Separately, President Vladimir Putin on 23 August ordered the test of an intermediate-range nuclear-capable missile. The decision comes four days after the US also tested such a missile, which came after Washington formally withdrew from the Intermediate-Range Nuclear Forces (INF) Treaty on 2 August, after years of alleging Russia had been violating the treaty. A new arms race is likely, though Putin has stated his desire not to do this.

Turmoil in UK, potential new coalition in Italy, snap vote in Romania and likely in Spain

Italy’s populist Five Star Movement (M5S) and the centre-left Democrats are in the final stretch of coalition talks, with President Sergio Mattarella having set a deadline of 28 August. However, a deal has proven extremely difficult and although it would likely bring a short term panacea to Italian markets, AKE believes it could help fuel support for the far-right League, which already leads in polls. Meanwhile Britain faces a series of crunch moments in the Brexit turmoil over the coming two weeks, with Prime Minister Boris Johnson threatening to block Parliament from re-convening on 3 September. Spain faces a crucial period as well as if no coalition is formed by 23 September, a new election will automatically be called. Romania’s government also faces collapse and snap elections or a short-term government until the scheduled March 2020 parliamentary election is likely.

Police arrested Tunisian presidential candidate and media mogul Nabil Karoui on money laundering and tax evasion charges, in what seems a politically motivated arrest. Karoui, leader of Qalb Tunis was charged with money laundering in July shortly after stating his intention to stand. Nonetheless, absent a formal conviction before 15 September presidential elections, Karoui will still be eligible to run. Some media outlets including Karoui’s Nessma TV have been banned from reporting on the campaign. Karoui, a recent addition to Tunisian politics and one of 26 presidential candidates in total has been making inroads into Prime Minister Yussif Chahed’s support base. The death of president Beji Caid Essebsi in July opened up increased political space in Tunisian politics and brought the presidential elections forward to September. Karoui’s arrest raises questions about the integrity of the prime minister’s race and may see his support increase.

The Democratic Republic of Congo’s Prime Minister Sylvestre Illunga Illunkamba unveiled his government cabinet, three months after his appointment and eight months after general elections in December 2018. The announcement followed months of intense negotiations between former president Joseph Kabila’s Front commun pour le Congo (FCC), which won some 70 per cent of seats in parliament, and its smaller coalition partner, President Felix Tshisekedi’s CACH alliance. The opposition criticised that a large majority of the new ministers do not have any previous government experience. As expected, the cabinet is dominated by the FCC, with 42 of 66 members hailing from Kabila’s party. Key portfolios including the mining and defence ministries, remain in the FCC’s – and thus Kabila’s – hands. Given its continued domination of Congolese politics, the FCC will likely seek to undermine President Tshisekedi’s presidency. Tshisekedi, in turn, could increasingly seek to build alliances with opposition heavyweights such as Jean-Pierre Bemba.