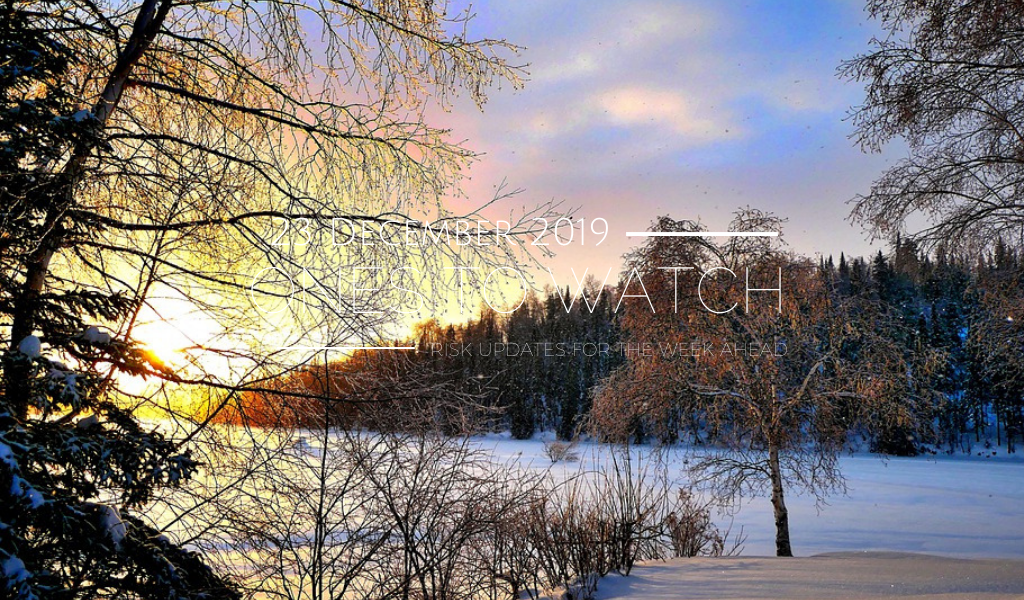 In Guyana, oil giant ExxonMobil announced on 20 December it began crude production ahead of schedule from offshore Liza field, marking the country’s entry into the ranks of global oil producers. The Exxon-led consortium, including Hess Corp and China’s CNOOC, plans to produce 120,000 bdp from the Liza field over the coming months. Liza is part of the Stabroek block, where the consortium has discovered over 6bln barrels of oil and gas, with production expected to reach 750,000 bpd by 2025. Exxon plans to sell the oil first cargo within a few weeks, while the government will hold a separate tender process to sell the first three cargoes as agreed with the consortium. The announcement was praised by President David Granger as oil production is expected to significantly boost economic growth and raise government revenue over the coming years.

On 17 December Chinese President Xi Jinping officially commissioned a new aircraft carrier, the Shandong, in a pompous ceremony in Sanya, marking a significant milestone as Beijing builds up its naval power. The Shandong is China’s second commissioned aircraft carrier and the first to be home-built. The ship was initially scheduled for commissioning in April 2019, but this was reportedly delayed due to technical problems. A modified version of the Kuznetsov-class design, it will be able to carry 36 J-15 fighter jets compared with the 24-jet capacity of the Liaoning, China’s first aircraft carrier. The Shandong’s formal entry into service will be viewed warily by regional neighbours given tensions in the Taiwan Strait and the South China Sea, but China’s naval fleet is still a long way from being able to challenge the US’ ten nuclear-powered warships.

Russian state gas giant Gazprom agreed to pay its Ukrainian counterpart US$2.9bln owed under a Stockholm Arbitration Court award as part of a deal to continue Russian gas shipments through Ukraine announced the previous day. The terms of the deal were further outlined by Ukraine’s Energy Minister, Oleksiy Orzhel, and included 65 billion cubic metres (bcm) of gas flowing through Ukraine in 2020, falling to at least 40bcm between 2021-24. Orzhel said the agreement included the option to extend it by a further five years but Moscow may be less keen to do so once the NordStream 2 pipeline is online. Meanwhile, in Uzbekistan the first post-Karimov era parliamentary elections gave results largely similar to the previous election, highlighting that although the country’s economic reform agenda will continue, political reforms remain distant.

The Polish government is set for new clashes with Brussels after the lower house of parliament passed legislation on 20 December that would censure judges who criticise the government’s judicial agenda, the source of significant tensions over the last three years. Brussels has previously opened Article 7 proceedings over the measures and last year forced the ruling Law and Justice (PiS) party to climb down on efforts to stack the Supreme Court with allies and sack critics. Meanwhile, the United Kingdom is now all-but-guaranteed to leave the EU in name on 31 January and in effect on 31 December 2020 but the process will continue to spark tensions as trade negotiations drag on through next year and Scottish and Northern Irish secessionists agitate for referendums on their nations’ status.

Israel’s Prime Minister Benjamin Netanyahu called for the upcoming Likud primaries to be cancelled ahead of the General Election in March 2020. The call comes after the Central Committee’s decision to cancel Knesset roster primaries was deemed unconstitutional by the Likud internal court. Netanyahu is being challenged in a leadership contest by Gideon Sa’ar and it is likely that Netanyahu’s calls to cancel primaries are an attempt to secure the loyalty of Likud’s Knesset members. Likud primaries threaten to undermine Netanyahu’s leadership bid and create further party instability ahead of elections. Netanyahu was indicted on bribery, fraud and breach of trust charges and Israel is set for a third election in a year after Netanyahu failed to form a government. Netanyahu will likely further pressure the internal court ahead of an appeal and seek to undermine the legitimacy of any primary vote.

Guinea’s President Alpha Conde announced plans to hold a referendum on a new constitution that could allow him to stand for another term in 2020. A draft published by the presidency provides for the president’s mandate to be extended to six years, renewable once. Conde, whose second term ends in 2020, could argue that a new constitution resets the clock on term limits, allowing him to stand in next year’s election. Conde’s victory in Guinea’s first-ever competitive elections in 2010 ushered in an era of unprecedented political stability, paving the way for an ongoing mining-fuelled economic boom. However, his refusal to rule out a third term has sparked several bouts of unrest since 2018, with at least 21 people killed in protests since October. Further violent escalation is now likely, with legislative elections scheduled for February a first potential flashpoint.