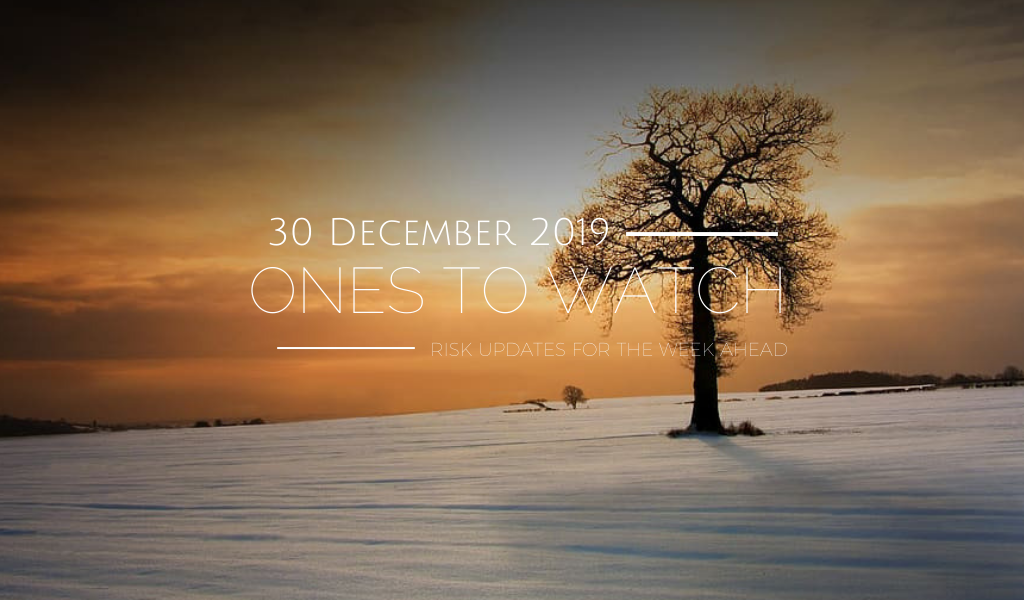 In Venezuela, President Nicolas Maduro’s government asked Brazil to hand over five military ‘deserters’ who are suspected of participating in a raid targeting a military outpost in Bolivar state, which left one soldier dead on 22 December. Maduro initially accused Brazil, Colombia and Peru of complicity in the attack, reportedly carried out by indigenous Pemon reservists led by rebellious National Guard (NG) officers and claimed some suspects fled to Brazil with stolen military weapons. On 28 December Maduro said three more suspects were arrested following at least 11 arrests made on 23 December, adding that authorities had recovered the majority of the stolen rifles and grenade launchers. Meanwhile, Brazil’s government stated that it was processing asylum claims from five deserting Venezuelan soldiers after stepping up border patrols on 27 December. Bilateral tensions will remain heightened over the issue.

Multiple protests aimed at disrupting festivities and shopping are planned for New Year’s Eve and New Year’s Day across the Hong Kong SAR following protests reintensifying over the Christmas period. Events known as “Suck the Eve” and “Shop with you” have been planned for 31 December in areas including the entertainment district of Lan Kwai Fong, Victoria Harbour and popular shopping malls. A pro-democracy march organised by the Civil Human Rights Front (CHRF) on 1 January has been given police permission to begin in Causeway Bay and continue into the central business district. The CHRF were the main organisers of the million-plus marches in June and mass rally in December that attracted around 800,000 people. The risk of violent unrest remains high and further disruptions to transport, acts of vandalism and clashes between protesters and police are to be expected.

Ukraine and Russian-backed separatists exchanged 200 prisoners in accordance with a pact agreed between Russia and Ukraine’s presidents on 10 December. The release of five officers of the disbanded Berkut forces, the police unit responsible for killing unarmed protesters during the Euromaidan protests in 2013-2014, sparked protests in Kiev. Despite increased momentum for further peace talks, the peace process could collapse at any moment given the entrenched position of both sides. Meanwhile in Afghanistan, the Taliban ruling council agreed to a ceasefire with the US  in principle, but confirmed no date when it would begin. Such a ceasefire has been a key US demand, but Washington previously cancelled a deal at the last minute in September. Widespread violence is likely to continue for the foreseeable future.

Ex-Chancellor Sebastian Kurz’s Austrian People’s Party is expected to form a coalition with the Green party on or around  7  January. Kurz’s previous coalition with the far-right Freedom Party (FPÖ) collapsed in May after a still-reverberating corruption scandal felled then-FPÖ leader Heinz-Christian Strache. Kurz will return as Chancellor while Green leader Werner Kogler is reported to have demanded more policy concessions than ministries in the new cabinet. Additionally, North Macedonia’s Prime Minister Zoran Zaev, head of the ruling Social Democratic Party (SDSM), is due to step down on 3 January after he agreed to the formation of a technical government before the 12 April parliamentary election. SDSM Interior Minister Oliver Spasovski will head the interim government. Both the SDSM and main opposition party, the nationalist VMRO-DPMNE have faced corruption scandals in recent years but the SDSM is narrowly favoured.

Turkish President Recep Tayyip Erdogan has attempted to speed up legislation allowing Turkish troops to be dispatched to Libya. Turkey is also increasing its military presence in the Turkish Republic of Northern Cyprus with plans to establish a naval base there as well as using Gecitkale airport to deploy aircraft and drones. Turkey’s expansion has been condemned by Greece and caused several confrontations with Israeli military and commercial vessels. Intervention in Libya increases the risk of Turkish forces fighting Russian mercenaries near Tripoli, while simultaneously undertaking joint-patrols with Russian forces in Syria. Meanwhile, following the death of a US civilian contractor, retaliatory US airstrikes resulted in the death of 55 Kata’ib Hizbullah fighters. US assets have repeatedly been targeted by rocket strikes and further attacks causing US casualties risk protracted conflict between US forces and Iran-backed militias in Iraq.

On 28 December, at least 90 people were killed and 125 injured when a truck bomb exploded in Somalia’s capital, Mogadishu. The city has long experienced terrorist attacks, but the incident is the deadliest in more than two years. 17 police officers and two Turkish nationals were among those killed. Al-Shabaab carried out a similar car bomb attack on 21 December outside the Global Hotel in Galkayo, killing seven. The group will continue to plot and attempt to execute such attacks. Meanwhile Sudan’s transitional government is making progress with some of the factions that sat out the August civilian-military agreement, as seen in a deal with the ‘Center Track’ faction of the Sudan Revolutionary Front struck on 24 December, but there remains a high risk the transitional authority will collapse when in February 2020, when it is due to expire.